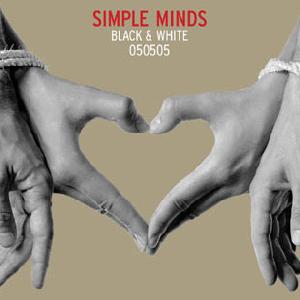 Black & White 050505 – A Return to Form
One of Scotland’s most successful bands, they defined a generation, have scored over twenty Top 20 hits in a career spanning nearly three decades. They have sold over thirty million records, had five Number 1 albums, a Number 1 single in America – plus two other American Top Ten singles and been Voted Q Magazine’s “World’s Best Live Act” in 1991.

Simple Minds embarked internationally on countless sold out stadium tours including headlining three times at Wembley stadium. They have influenced bands as diverse as current favourites Bloc Party, Muse, as well as Moby, Manic Street Preachers and Stereophonics along the way. Most recently Yellow Card paid homage to their biggest hit, Don’t You Forget About Me at the MTV Movie Awards.

Now after a three year hiatus Simple Minds are back with their best CD since New Gold Dream (81 82 83 84) called Black & White 050505 Released in Europe on September 12 by Sanctuary Records, the album recalls the sweeping, vast sound that characterised their biggest hit albums, Sparkle In The Rain, Once Upon A Time and Street Fighting Years. Black &White 050505 recorded in Italy, Holland and then mixed in Los Angeles by the legendary Bob Clearmountain is a real return to form for this four piece band and should see the emergence of a whole new generation of fans as well as satisfying their current ones.

This is a CD that captivates on its first listen and then just gets better. What with the renewed popularity of Duran Duran, New Order and Depeche Mode and the propensity for pop acts to sample 80’s sounds, there is little doubt that Simple Minds time has truly come again.

The CD’s opening track, Stay Visible has all the depth, melody and warmth of a theme tune for the next Bond movie. Lingering in the mind long after the last chord has played, it evokes images of an expensive open top car zooming along an empty mountain road or an endless stretch of Arizona desert.

Jim Kerr’s distinctive voice comes through strong in their first single, Home released on 5th September and together with co-founder and lead guitarist Charlie Burchill, they have produced a pop song that should lay to rest any rumours that this is a band that have had their day. Home recalls classic Simple Minds with a driving rhythm and the distinctive Burchill guitar sound. Kerr says “There are a number of songs on the album that will make great singles but I feel that the way Home kicks in with Charlie’s signature soaring guitar riff, there could be no better way off announcing to the world that Simple Minds had recaptured the kind of uplifting musical spirit that defined our best work. Lyrically, Home is a pop song with a spiritual heart, taking us on a secret journey through the thoughts of someone who is desperately seeking out their own inner crusade.”