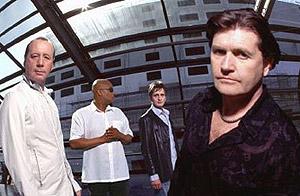 Posted at 19:32h in All News, Reviews by Simple Minds
Share

Simple Minds Go ‘Black & White’ On New CD.
With new wave revivalists like The Killers and The Bravery storming the U.S. charts, first wavers Simple Minds have picked a splendid time to drop their first all-new studio album in three years. Due September 13th in North America via Sanctuary and a day earlier internationally, Black & White 050505 was recorded in Italy and Holland.

Nearly 30 years after forming in Glasgow, founding members Jim Kerr (vocals) and Charlie Burchill (guitar) are still on board. “We can honestly say that we are delighted with the results and look forward with a totally revitalized outlook to this next phase of our ongoing creativity,” explains Kerr. “We feel with some certainty that people who grew up with Simple Minds will share our enthusiasm for this new work.”

Best known in the U.S. for the chart-topping love song Don’t You Forget About Me, the group proved even more popular in Europe, where it has scored countless hit singles and albums.

And while some classic rockers are attempting to keep pace with the young bucks by overhauling their sound completely, Kerr and company had a different mindset for their latest. “We wanted to make an album once again that was full of dramatic and atmospheric pop music,” he says. “We felt that we needed an album that proved as much to ourselves as anyone else, that the big beating heart of Simple Minds was very much alive and driving us on once again.”

The set will be preceded by first single Home. According to Kerr, it was a tough call. “There are a number of songs on the album that will make great singles. But I feel that the way Home kicks in with Charlie’s signature soaring guitar riff, there could be no better way off announcing to the world that Simple Minds had recaptured the kind of uplifting musical spirit that defined our best work.