Home > All News  > The Pivitol Point 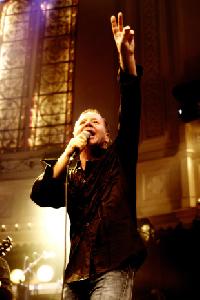 From day one we looked around the sparse rehearsal room that we had secured for ourselves, and amid the dirt and debris of what in effect was the store room of a decaying light factory, became intimidated for the first time by the realization of the magnitude of our dreams.

Although barely sixteen, we were in some sense almost old enough to go to war, or to immigrate to far flung continents of the world even, as kids of our age only a generation previously had done. But in a way, in choosing to do what we were about to do, we had already gone to war – least of all on the kind of predestined life that our then industrial society – was due to lay out in front of us.

And likewise within our hearts we had also in a sense already immigrated as soon as we set foot in that rehearsal room. Because after having “plugged in and switched on” for the first time, as well as witnessing the shock and sensation derived from the thrills of doing just that, there genuinely was no turning back to however life was previously. From then on all we wanted to do with our lives – was to be in a great live band.

So desperate to live within our own heads and within our own space and time, we had chosen a course on life for ourselves that some with reason would call fantastical! While others, would merely call us crazed and irresponsible. Hooked on the attention, we encouraged them to call it as they saw fit. But in truth we were no longer listening! Already too far gone, and far too busy, messing in what to us had become the mystical! Not that we would have told you, for actions always spoke louder and words are nothing unless you really mean them.

But we really did mean everything that we said, we meant it then and we mean it now! And so the desire that was borne out our early fixed goal continues to buzz throughout our collective nervous system every single time we are set to put a foot onstage. And if any validation of that continual drive is needed, then hopefully what you experience tonight will suffice.

Meanwhile a heart full of thanks for coming to see us, and already we hope to see you next time.