They never went away, you know

Home > All News  > They never went away, you know 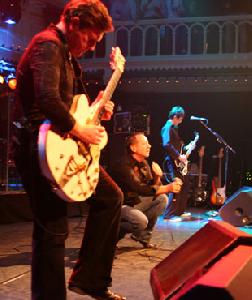 Simple Minds explain to Neil McKay how they’ve stayed in the loop for nearly 30 years, and why Belfast has a special place in their affections.

Simple Minds have had a long and happy association with Belfast. Their only British No 1 single was named after the city, as Glaswegians they have a natural affinity with their fellow Celts, and they have only happy memories of gigs there. All of which renders guitarist Charlie Burchill virtually speechless when he is told that it is 16 years since the band last played in the city.  “You’re joking me . . . you can’t be serious? . . . is it really that long?” spluttered Burchill who, along with singer Jim Kerr, is the sole remaining original member.

“I can’t believe it’s been that long. You know, now that you’ve told me, I feel a bit guilty that we haven’t been back in such a long time. Why has it taken so long? I don’t honestly know. It’s probably been an agent or promoter thing because I don’t think we’ve ever turned down a Belfast show. We absolutely love Belfast, and it’s amazing that we haven’t played there for 16 years. We’ve always had a real soft spot for the place, from the first time we went there we’ve loved the people. Belfast for us is so similar to Glasgow – it’s amazing how close it is to Glasgow in so many ways. And you always get fantastic audiences in Belfast, they’re always amazing…”

The band end the 16 years of hurt for their faithful fans when they finally return to the city for a Waterfront Hall gig at the end of the month.

Burchill added: “Jim had been over doing some press and radio last year when our Black And White 050505 album came out and people kept asking him when we were coming back to play again. So we got on to our agent and told him ‘you have to get us a show in Belfast’. Then we went one stage further and decided to start the tour there.”

Of course, the band will forever be associated with the city because of Belfast Child, the 1989 hit that was to prove their high watermark commercially.

“Belfast Child was a massive song for us, and it has always been very special to us,” said Burchill. “It was an old traditional song, and we sort of made it a Simple Minds song. Growing up in Glasgow we were aware of the same sectarian differences and, although you could maybe say it was naïve, we wanted to show a more positive side of Belfast, that if you left it to the people without all the politicking going on, you could see that there was real hope there. We just wanted to give a positive message, and show that it could be different one day.”

“It’s a song that we don’t always include in our live set – sometimes with a track like that Jim feels that the drama in the song is almost too big for the venue, so sometimes we don’t play it – but we all love the song and I think we’ll absolutely have to do it in Belfast.”

The band’s fortunes tapered off gently from the start of the 1990s, so much so that the Black & White 050505 album was being hailed as a comeback in some quarters. Not so, says Burchill. “It’s hard for us to know how people perceive the band these days. In the 1990s we were still selling relatively huge amounts of records and had a real hardcore following, but there was so much going on, so many new bands coming up, that we slipped out of the mainstream.”

“And because of that people think ‘what happened to them?’. But we’ve never stopped recording and touring, we’ve never even had any major hiatus. There might have been two or three years between albums but, in those years, we were always writing or staying busy. It’s always been a bit of a surprise for us that people thought we had stopped, and that they think this album and tour is a comeback, but it’s really not the case.”

“Indeed, after nearly 30 years together, there is a realisation that just being a going concern is some cause for celebration. “I can remember that after we made our Empires & Dance album we were dropped by our label – we had done three albums and we thought that was the end of our career. Fortunately, we were picked up by Virgin, and the first album we did for them was a double album, and not only was it a double album but it was incredibly obscure.”

“At that time, we couldn’t believe that Virgin were going to let us go ahead and do it – it was unheard of. Young bands today wouldn’t be allowed to do something like that – Radiohead could do it, but they had to have huge success before they went off and did something more abstract. Bands today have one album, one shot, and if it doesn’t work then they’re dropped.”

Simple Minds are to play the Waterfront Hall, Belfast, on January 31st.