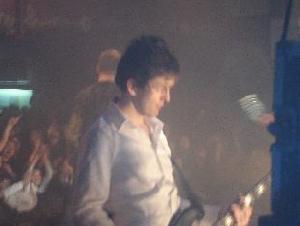 Simple Minds, at 25 years old, have been buffeted by the harsh tides of musical fashion. They began life in Glasgow in the late ’70s as punk band Johnny & the Self-Abusers prior to releasing their first album, Life In A Day in 1979. Their high point was 1982’s much-sampled New Gold Dream before the mid-80s turn towards the stadium rock genre. Their fortunes have been mixed over the last decade but one thing is certain: “on the ground”, there hasn’t been this much excitement, praise and anticipation about a Simple Minds tour for a long time.

It’s 17 years since they last played Belfast. Then they had just had their only number one with Belfast Child, a song about Northern Ireland and the only chart topper with Belfast in the title.

Love it or loathe it, Belfast Child was a song evoking complex sentiments. It envisioned a pre-ceasefire city stricken by the demise of heavy industry, unemployment and emigration, but had an optimism at its heart: the dream of return and the possibility of better times ahead. “The child”, at least in contemporary regeneration babble has indeed sung again: Simple Minds played last night in The Waterfront Hall Á Belfast’s “good room”.
And this is a revitalised band: leaner, hungrier and tighter.

The bombast has been reigned in, the pile-driver drums pulled back. There is a newly rediscovered pop sensibility at work here: catchy choruses and spangling guitar chords abound. Stay Visible rumbles along like Coldplay on steroids. Stranger, all uplifting chorus, has the audience strapped into singing along as if in an irresistible headlock.

The inclusions from the extensive Simple Minds’ back catalogue are a dream for anyone who wants, or cares, to remember the band at the top of their game and shut out the pomp.

The 1979 Á 1983 “high period” predominate: Love Song, Seeing Out The Angel, Colours Fly & Catherine Wheel, Hunter & The Hunted and Big Sleep sound fresh and are played with a combination of urgency and understatement. This gig unfortunately hasn’t crossed over to a younger audience as most of the folk are thirty and forty-somethings.

This is a pity, as the band were fantastic.

Simple Minds, it appears have been allowed to capitalize on their legacy as one of the most original and distinctive groups of that important post-punk period and receive some of the acknowledgement they are due.

A great performance to an enthusiastic, sell-out Belfast audience.