Off To A Good Start 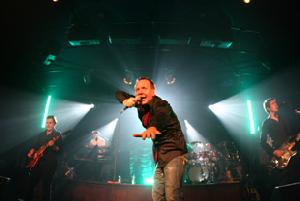 One week only and already we have blitzed our way through a handful of proud cities such as Dublin, Belfast, Aberdeen, Glasgow and Newcastle. Fascinating places, all the kind of towns that I could happily spend at least a couple of days in – wandering around mainly, probably taking in a museum here or a gallery there, a stroll on the waterfront perhaps, botanical gardens etc. Of course ideally I would also find the time to sit in any little tea shop, content to let the winter hours idle past. Behaviorally it hardly amounts to rock and roll Babylon, but not much of that stuff appeals to me in any case.

As for the concerts, in the main we are very happy with the way things have gone and do feel that we have got off to a good start with each night in turn getting increasingly better. As for the choice of songs that we have chosen to play, I would say that it is an adventurous set that reflects the various targets that we want to hit. For example, ideally each night we want to play a set of songs that appeal to both to our hard core followers as well as to those types who maybe only know the so called greatest hits of Simple Minds. Therefore we have put together a programme that combines plenty of our “big songs” as well as some relatively obscure Simple Minds catalogue songs that we have either never played or played very little.

Additionally we have chosen to play a substantial amount of new songs from our latest album Black and White, while also leaning heavy on many songs from our New Gold Dream album – still considered by many to be our classic! All of which as an idea sounds very good, however pulling it off is another thing altogether, especially technically as it is a much more sophisticated set in comparison to any of our others in recent memory. Thankfully though we have a brilliant crew who work hard in every way and are always on hand to enable us to rise to the challenge that we set for ourselves. More than anything however, the overall impression we would like to give anyone attending the shows is the impression that they got great value for their money!

Highlights for me so far then?  Belfast without question – the warmth of the people and that beautiful new venue made it so. Seeing my parents who traveled over from Glasgow for the Irish concerts enjoy themselves so much was a highlight also. The positive reaction from the audience that we receive each and every night, particularly to the new songs and not forgetting the people who travel the length and breadth of the continent to see us. Especially with regards to the Japanese and American fans who came all the way to Scotland to see us play our hometown.

I have to say that an enjoyable and funny chat with Bono, who was as generous as ever while we were in Dublin, was obviously a highlight. And last but not least, the chance by coincidence to toast the brilliant Bruce Findlay on his birthday back stage after the Glasgow show.