Up close and personal

Home > All News  > Up close and personal 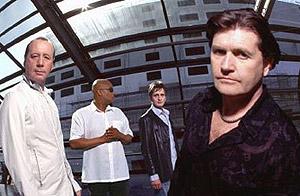 Up close and personal with the fans.
Simple Minds frontman Jim Kerr believes it’s because he’s still a music fan that he’s continued writing, recording and performing for the past 25 years.

To prove his point he reveals that he waited outside a record shop for 20 minutes in order to buy the new Antony & The Johnsons’ album. “There are periods when you feel nothing is happening in music – then there is a sudden glut of artists who are really inspiring,” he says, adding that Arcade Fire and El Presidente are also among his current favourites.

“It really takes you by surprise and you rediscover the thrill of why you joined a band in the first place.”

Jim, who now lives in Sicily, first saw Mercury Music Prize winners Antony & The Johnsons on a late night TV show. “It was an arts programme and I switched on halfway through their performance. The next morning I went to the record store because I had to hear the album – but I was there too early so had to hang around for 20 minutes until opening time!”

Simple Minds are now back on the road promoting their latest album Black & White 050505. The difference this time around is that they are playing smaller venues – in Birmingham’s case, the Carling Academy tonight rather than the NEC Arena where they last performed in 2003.

“We did some promotion work in small European clubs last summer and really enjoyed it,” Jim says. “It gives people the chance to see you up close. We see all venues as a different challenge and we have songs that can work in all environments, even if we have to change the arrangements.”

The good news for Simple Minds’ fans is that Jim can’t stop writing new songs and already has a new batch ready for the next album.

“Five years ago I didn’t know if I had another song in me,” he reveals. “I felt so distant from the music it was like getting blood from a stone. But now I feel I could create a song every day. I put it down to my embarking on a new life in Sicily. It was a great move for me all round.”