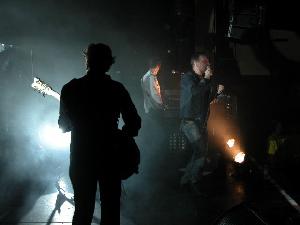 THERE is something special about seeing a big name band in a small venue. I have fond memories of Black Sabbath’s charity gig for St Basil’s at the Carling Academy and ZZ Top’s one-off special at the same venue. But it’s even better when the band acts like it’s still playing at a stadium or arena – and that’s just what Simple Minds did.

Lavish lighting, superb sound and one of those perspex screens around the drums all contributed to the impression that this was a show that should still be gracing the NEC. Frontman Jim Kerr was frustrated at not being able to bounce around the stage as much as he’s used to but he put in a sterling performance. It was the uptempo classics that really got the enthusiastic audience going like All The Things She Said, Waterfront and Don’t You Forget About Me.

Two encores closed the one hour and 45 minute gig, with the final song Alive & Kicking still a defiant statement from the band after more than two decades of hits.