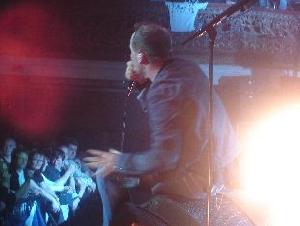 It would be impossible to consider touring life without mentioning the part that hotels play. Who knows how many hotels that we have stayed in over the years that we have been in Simple Minds but surely we must have literally stayed in thousand. It stands to reason then that the certain feeling of anonymity that is inevitable from spending huge chunks of our lives in what to many would seem like a life lived entirely in strange rooms – sleeping in unfamiliar beds etc –  is in fact absolutely normal to us.

Of course for the most part we have been incredibly fortunate to stay in the kind of establishments that most refer to as luxurious, but that was not always the case. Initially due to a lack of finances we often stayed in the most basic of accommodation and never seemed to mind that much as I recall. In any case if you are not happy within yourself or if you are not happy with the kind of life that comes with touring in a rock and roll band – then even a palace becomes a prison – and you become a prisoner within your own heart.

I have seen this happen to others who did not enjoy the months and years required of touring, but thankfully it has never happened to me. I relish the kind of emptiness that exists when you feel like you never experience the same set of four walls each day and somehow it suits me to flit like a spirit with only a handful of memories. There is a kind of “lightness” that comes from living so unattached to anything other than the concerts that our whole day is centered around. Deep down I think if pushed most artists would tell you that a kind of life without gravity and attachment is quite necessary to live a solid creative life.

And so to hotels and hotel life! People ask me of course what is the best hotel that you have ever stayed in and why? To be honest although I sleep in these places I unfortunately rarely experience the services that they have to offer. Time is the culprit and the lack of it is the reason why that is so! For me what I like or like or dislike about a place is all tied up in the natural ambience. Hotels have been good to me as an artist however and many of my lyrics have been written or part written in hotel rooms. The Columbia Hotel in London is where much of the New Gold Dream album was written for example. The Negresco Hotel in Nice is another establishment that sent in the creative angels – it is where most of the lyrics for our Once Upon A Time came together. The Mayflower Hotel in New York is where our Real Life record emerged.

Finally, just a few days ago in the Berlin Ritz Carlton, Charlie Burchill and our co –producer Jez Coad set up a mini recording studio and in doing so kicked off the initial stage of writing for our next album. We intend to write the record as we tour over the coming months and therefore we hope that many other hotels will bring us inspiration as we go about searching for the special kind of words and melodies that make a great Simple Minds album.