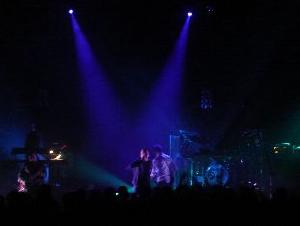 And now Greece for what will be the very last concert of this leg of our European Tour. Since we started in January we have driven just over 23,000 miles through 23 different countries and played almost 60 concerts. Being so I have no hesitation in saying that this has been our most intense tour to date – at one point we somehow managed played 10 shows in 12 days!  Believe me, just about no one else does that kind of work on the road these days!

For me these stats become even more notable when I consider that this would be a punishing enough schedule for any young rock and roller, never mind the not so young. (Me!) Again these figures take on an even more dizzying effect when I consider that far from being over this is merely the end of one leg of a tour that will keep us busy at least till September and beyond if we are to take up offers to play in North America in the fall.

Nevertheless in fact the tour has been one long highlight in that in my opinion this truly is Simple Minds best tour ever. I say that because I am convinced that never before have we played to such a consistently high standard. And all credit to these musicians and crew who between them made sure that we never had anything less than a great show on any single night, with the exception of maybe one concert where unfortunately technicalities with the venue made life very difficult for our sound engineer.

As for my own part in all of this, I am just so relieved that I managed to come through this quite grueling schedule without having any problems with my voice. Considering this was a tour that took place in the dark heart of winter and with the reality of more than five two hour long shows staring at me on a weekly basis, it was with some considerable nervousness that I set out on this tour way back on a frozen Dublin night. I often wondered with the sort of schedule that we had set ourselves – a schedule that most groups would never consider – if my voice would hold out with fatigue, colds and influenza etc taking their inevitable toll. My worries never materialized thankfully!

Of course a solution that could have helped alleviate my concern would have been to limit ourselves to playing ninety minute sets. Not many people or promoters feel short changed with concerts that last about an hour and a half.  Nevertheless wherever possible, we wanted to give a performance that felt akin to a long distance journey, and so anything less than around two hours just did not seem to go the kind of emotional distance that we wanted to cover with this set.

Well I made it, and with relative ease for the most part. A little rugged at times, also a little tired towards the end when it came to the fourth show in a row. But on very few occasions we felt the need to shorten the set to save the voice, and I am so thankful to have both a voice and a heart that can stand up to such a physical test.

I know more than anyone that I am hardly the best singer there is, but on this evidence I am working with a rare force that is not common. A force that very few others have to call on! What more could I ask for?