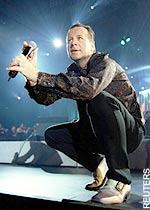 Jim Kerr first visited Sicily when his group, Simple Minds, were just starting out. As the band’s success grew so did his love for the island and when he lost his musical direction, it was Sicily – and the hotel he has built on it – that inspired him. By Charles Starmer-Smith.

I was 14 when I first realised the world was not all black and white. To a young kid growing up in Glasgow in the 1970s, life was all too monochromatic compared with the explosion of colours I glimpsed from a coach window on a school trip to Rimini.

In the three decades since, I have been driven by a curiosity about what the rest of the world may have to offer. But it is to Italy, and specifically Sicily, that I have kept returning.

In the early years of Simple Minds I had a girlfriend in Rome who shared my sense of wanderlust. She would take me on these crazy, spontaneous drives down from Rome through Naples, Campania and Calabria – in those days they were the badlands of Italy, afflicted by crime and corruption, but that was part of their appeal.

Through her, for 10 years I got to know and love Italy, and gradually, from new friends made, I began to gravitate towards Sicily.

I first set foot on the island in 1982. We had a small gig in Messina, in the north-east of Sicily.

Performing on a rundown sports field not far from where the ferries docked, the band was a long way from finding fame and fortune. But it was the historical significance of the place that made that concert memorable. Just a stone’s throw from where we played lay the Straits of Messina – the narrow stretch of water that separates Sicily from the tip of Italy and the focus of nearly every major Mediterranean war.

In the three days I spent on the island, I was struck by how, with its history of invasion and occupation, the island can seem at any one time part of Africa, Asia or Europe. Sicily is as near to Libya or Tunisia as it is to Rome, and you can see those North African influences in everything from the architecture to the food.

It happened to be my birthday and I remember being taken out to this amazing place for lunch in Taormina. I forget the name, but as fate would have it, it was just 100 yards from where I would later build my hotel. With the band still struggling to make money, I never imagined that one day I might be welcoming wide-eyed Glaswegians to my terraced restaurant.

I kept returning to the island, and in particular Taormina, Sicily’s former Byzantine capital; but it was not until I met Antonio Chemi over a decade later that I entertained any serious thoughts about making a permament move there.

We were introduced at a concert in the north of Italy – he had travelled with friends from Sicily and was staying at the same hotel as us. Antonio was quick to tease because he knew I had been to Taormina several times but had never set foot in his family’s restaurant.

At his invitation I later visited him (and his restaurant, La Botte, where I have been feasting on spaghetti alle vongole ever since). It was the beginning of a firm friendship (and later business partnership) and as a regular lodger in his Taormina apartment, I tasted a life so sweet that I wanted a piece for myself. And it was here that we hatched our idea for a hotel.

Initially we looked at a decrepit pensione in the heart of the town – I had this fanciful notion that we could transform the old building. But this was Sicily – as rich in history and art as it is poor in infrastructure and bureaucracy – and the practicalities were always going to outweigh the romance of the project.

After two years of searching in vain for a suitable property it finally dawned on me that it might be easier to build something new. Fortune had it that beside Antonio’s family home was one of the few substantial plots available with planning permission. High above Taormina it looked out over the townhouses that seemed to cling impossibly to the steep slopes below, while beyond it offered wonderful vistas of the Ionian Sea and Mount Etna. It was the perfect setting.

From the outset, we were determined to maintain an ancient feel, using only Sicilian fabrics, materials and craftsmen. The walls may have been new, but the local Caltagirone ceramics spoke of the past. We used Sicilian stone and wrought iron for the main structure and local chestnut wood for the furniture, while the grounds and terraces were planted with more than 50 indiginous plants. With just 21 rooms the hotel offers an intimate experience while blending with its surroundings. It was a labour of love. I had been warned by Sicilian friends not to expect any business to be completed in a hurry, particularly as a foreigner. Although I did not do the rockstar thing of turning up in a Ferrari announcing that I was there to build a swanky new hotel, there was still a minefield of bureaucracy to negotiate. Celebrity counts for nothing in a society such as Sicily, where getting anything done is about who you know. So I decided to stop surrounding myself with English speakers and immerse myself in all things Sicilian, though the red tape still provokes the odd Glaswegian expletive.

But the labour has been worth it. Even after seven years I am still constantly amazed by how a small place can encompass so much.

Taormina is often called Sicily’s answer to St-Tropez – certainly the city’s main artery, the Corso Umberto, is teeming with high-end fashion boutiques and lavish antique stores, alongside the quaint pasticcerie and gelaterie.

You might spot Antonio Banderas, Rod Stewart or Michael Douglas returning from the beach for an early evening passeggiata, sipping a cocktail at the 15th-century San Domenico Palace hotel or dining at one the expensive al fresco restaurants and bars. But Taormina offers so much more than this.