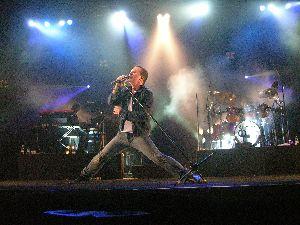 There is no gig either too big or too small that we would not attack with the fullest gusto. For example this week we will play a tiny club that is due to leave everyone drenched in sweat if not a little deafened, while on the contrary only the other night saw us in front of an ecstatic audience of 50,000 in a sun drenched field in Normandy. The point I make is that every show is equally important despite the varying circumstances, each a challenge and all of them bringing a feeling of great satisfaction to the audience and ourselves when we have given our best on the night.

And talking of varying circumstances, what a shock when we arrived in Bonn last week for the first in our series of outdoor shows throughout Europe! It may have been the 1st of June and therefore technically summertime. Can someone then explain the icy winds and frozen rain that fell throughout the day leading up to the show? After the sunshine and Blue skies of OZ etc we were certainly not hoping or imaging that we would have to deal with that kind of weather while kicking off a European summer tour! But we did deal with it, as did the audience and a warm and passionate concert took place nonetheless.

Due to the World Cup competition that begins this week in Germany, it will seem that much of the world is focused on football. Within Simple Minds it is also true that much of our thoughts over the next five weeks will be on the games. Sadly however, Scotland the country of my birth has not qualified this year, leaving me a host of other countries that I hope will do well. Above all and without wishing to sound like the blandest diplomat, I do hope that “football is the true winner” this time around. And with that I mean that I hope that this game that I grew up loving – it meant so much to me especially as a kid – restores its image as the beautiful game, meaning that it will be free from cheats and gamesmanship on the field, and equally free of the sort of thugs and racists that through the years have often used football as a stage on which to perform their cowardly and idiotic antics.

Simple Minds have been asked to perform at the huge party that the city of Berlin is giving as an opening event for the World Cup. Much of our three song set at the event will be playback; therefore I suppose it will be more a TV spectacular than an actual live gig as such. They tell me that live footage from the event will be shown in countless countries around the world and that they are expecting over half a million Berliners to turn up at Brandenburg Gate where the show is taking place.

How amazing then if even just to be asked to perform at such a high profile event. As little as a year ago surely none of the organizers would have considered us as suitable for an event of this magnitude. Evidently at least in Germany, all the work and promotion that we and our record company have put in over the last year has really paid off and in doing so gone a long way in reinstating our group with a little of the heavy weight profile that was common to our image so many moons ago!

It feels quite nice too!

Well finally the weather has changed and at last summer really is here in Germany. It really was wonderful to be under the Brandenburg Gate and look out to so many people; in fact it was probably the biggest audience we have stood in front of. Pity that we could not actually play live as I cannot help but feel the banality of performing “playback”. Meanwhile meeting Pele, the greatest player of all time and the greatest ambassador of the game, thrilled all of us to the max!