Don’t You Forget About Us / Liverpool Echo

Home > All News  > Don’t You Forget About Us / Liverpool Echo 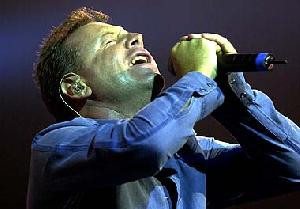 Don’t You Forget About Us / Liverpool Echo

SIMPLE Minds are in the middle of World Cup fever. Having opened the tournament with aconcert in Berlin, the Scottish rockers are now gearing up for Liverpool Summer Pops.

But unlike other Scots, frontman Jim Kerr says he’s supporting England all the way. Jim says: “We’re all big, big football fans, so opening up the World Cup was a maximum joy for us. I’m going to be supporting England, though. I’m arare species as I’m a Scotsman who wants England to do well. My son was born in England and, well, if you can’t enjoy the football with your son, what’s the point of being a father?”

The career of Simple Minds reads more like amatch report than the history of apop band – they’ve seen the ups and downs but always manage to score for the fans. Frontman Jim Kerr and guitarist Charlie Burchill took the band from cult status in the 80s to become mainstream pop idols.

Jim laughs and in his soft Scottish accent says: “It’s been pretty good. Along the way we’ve met alot of people who were more talented than us but we really desired it and we wouldn’t accept the knockbacks. We played through the good and the bad – through being in fashion and out of fashion, all that stuff.

“It’s an amazing relationship I have with Charlie. It’s actually amazing that we’re still friends, especially as we’ve been through thick and thin together.”

To date, Simple Minds have sold more than 30 million albums worldwide. But it was by chance that they broke America, earning a US Number 1 single with Don’t You (Forget About Me) which featured in cult film The Breakfast Club. Initially the band didn’t even want to use the song as it was, at the time, the first one they hadn’t written themselves. Keith Forsey wrote it and offered it to Jim and co after Bryan Ferry had rejected it.

Jim says: “I wasn’t ambivalent about doing the song but about using someone else’s song. Keith Forsey turned up unannounced at arehearsal and we really liked him and when you like someone you’re much more open to them – but we still told him we weren’t going to use the song. Anyway, we did it in our own way, in our own style and changed our minds. To get a number 1 in America was something – I mean, they did invent rock and roll after all.”

Black and White 050505, the band’s recent studio album, garnered massive critical acclaim and they returned from their first tour of Australia in 17 years to rave reviews of their live shows.