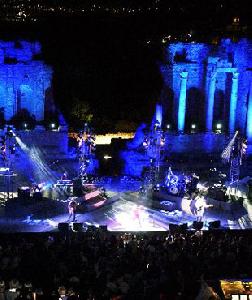 When we are truly ourselves and giving all of our best, it often seems like we are awake among sleeping people. The energy alone that we radiate at those times awakes others. And while the words we say mean nothing, it is the energy that transforms.

I am talking about our group of course, but the fact is that indifferent situations we are all capable of this effect.

Meanwhile there is no getting away from the fact that over this last weekend Simple Minds were very much awake among sleeping people.

It has been an emotional few days for me. We played three quite monumental shows in twenty hours. And while this was going on, in the background of my own personal life, yet again I had to take a sideline seat as someone I love very much wrote a new chapter in their own sad story. A tale of utter self destruction.

I may be embarrassed but I have to say, it has taken me a woefully long time to realize that it is rarely intelligence and wit that makes the best music. Rather it is dreams, naivety, intuitions and exuberance that give birth to the best material. Meanwhile almost inevitably all the best songs are usually the ones that shout for a better world of deeper understanding.

Simple Minds have a festival set that is full of those kinds of songs, and as performers we soar along with our music on those occasions. Leaving our desperations behind, inhabiting a different world.

See you under blue skies, maybe see you in Taormina!