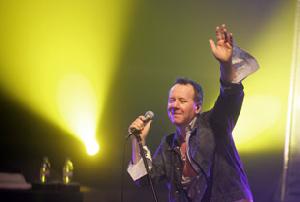 What appealed about playing T on the Fringe?

At first, there was talk of us doing T in the Park. That put the idea of a Scottish festival appearance in our heads. We’ve never done one before. The vibe of T on the Fringe is really special and the amazing location really appealed to us. There’s also a feeling of coming full circle because this will probably be the final date of our year-long world tour

Wasn’t it tempting to do T in the Park instead?

Our new Album Black And White 05-05-05 not only did a great job in letting people know Simple Minds are still very much alive, it also reinforced we have a music vitality again. I’d like to do another album before we stepped on stage at T in the Park. I don’t want to go there as a museum act. With the Black And White album, even our biggest critics would have to hesitate before writing us off as an 80s stadium band.

Have you been to a gig at Princes Street Gardens?

No, but it’s a place I love from my time living in Edinburgh. I’m probably one of the few Scots who’s lived in Glasgow and the capital. I love both cities. We go around the world playing great venues – but few have such a spectacular backdrop as Edinburgh Castle.

Is it true you’ll be filming the show?

We’re planning a live DVD and have been filming as we go along on this world tour. We’ve got footage from Russia, Hong Kong, Australia and Europe. Next year will be our 30th anniversary and we want to do something to mark that. So we’ve been stockpiling on-stage material – everything from sweaty little clubs to beautiful, historic amphitheatres.

Are you surprised Simple Minds have lasted 30 years?

When we formed the group in 1977 we lived for the moment … you were only thinking as far as your next gig. Nothing else seemed more important. I’m well aware we’ve got a great history but I still can’t believe it’s 30 years. Best thing of all though is that everything about the band – from the songs, gigs, and our involvement in the internet – it still feels fresh. We’re far from exhausted … when maybe we should be.

What are the highlights of 30 years?

I always single out the Nelson Mandela tribute concerts. It was probably us at our best. Another was our first gig at Satellite City in Glasgow in 1977. We played songs such as Chelsea Girl and Pleasantly Disturbed. Even then, guitarist Charlie Burchill and myself knew we were going places. Hitting No.1 in America with Don’t You Forget About Me was great, too. Very few bands from our neck of the woods achieve that.

Are you writing for a new album?

Things in the band are really buoyant so you tend to float into the next project. We’ve got another album which has grown out of Black And White … and it wasn’t a bunch of leftover songs. I reckon we’ve got the foundations for a great new record.