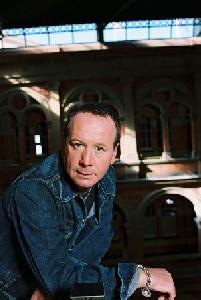 We are now coming to the “dog end days “of our summer tour and to be frank I can’t stand it. Not the actual concerts of course. What I mean is the broken up schedule of a show here, a show there, a few days off here and a few days off there etc. For example, from now until the tour ends we barely have even two gigs in a row. Meanwhile I prefer to play consistently or else my entire rhythm both mentally and physically gets jumbled up. It is this feeling that I don’t like. But I will deal with it! What else can I do – runaway? Or walk away maybe!

I say so bearing in mind that I am of course thinking about what I would like to do as soon as the tour ends. Contrary to the idea that I should want to collapse onto the nearest sunny beach after almost a year of touring! In fact the notion that appeals most to me is that immediately after the last notes have rung out at the end of our concert in Edinburgh, I would instead like to set off instantly on a ten day trek in some destination or other that could only be described as remote.

To explain further, I am a walker and have been as long as I can remember. This is a passion that has been with me always and I have never at any point lost my desire to walk.  For me the benefits of a long walk or a hike are bountiful, and although I am always busy especially while touring, somehow I usually find at least an hour or so to walk my self daily into a state of well being or so it seems. Whichever way walking has certainly done me well on this tour as I have kept buoyant throughout all of these months and will finish much healthier and happier than when we began. Not wishing to tempt fate of course especially with a few weeks yet to go before completion!

In truth there is little I like more than to spend a whole day, week, or fortnight even, going off for a real wander, and I am never happier that when the all to rare opportunity to do so occurs. Having already walked all around Scotland, Ireland and gradually Sicily, I am keen to get to some of the other magic walks that beckon – Himalayas, China, Andes etc. But what is it exactly that I get from spending hours on foot and in all weather?

Well, it is difficult to describe but genuinely I believe deep down that I have “walked myself” away from various illness, including a profound depression. Such is the positive mental state that I derive from “hoofing it”; the thought has arisen that I may be addicted. Forest Gump style! Additionally I have little doubt also that walking has had a great creative effect on me and as such I believe that I have “walked myself into my best thoughts” including in my opinion some of the best song ideas that I have produced to date.

But more than all that, such is the high that I get from walking, I somehow now believe that there is no thought so burdensome that “you cannot walk away from it”. Sounds ridiculous but try it and you may see exactly what I mean as I proclaim that – walking cures all –  and sitting on your ass is the real killer!

At any rate, “the end of tour blues” can hit a touring musician real hard, and in all seriousness it is possible to suffer a real come down when a year long tour ends.

I am adamant that this will not happen to me.

Anyone seen my boots?