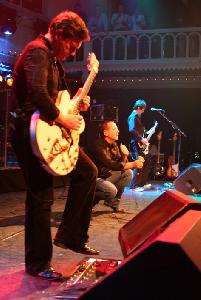 Modern life began in Edinburgh when a handful of Scottish thinkers changed forever the way people thought about what it is to be human. But don’t worry – this is simpleminds.com after all and being so I am not tempted least within these pages to elaborate on what came to be known as “The Scottish Enlightenment”.

Far from it all beginning, the capital city Edinburgh is where this week our year long tour finally comes to an end. It was in fact the last weekend of August “05 that we began performing what was a promotional tour in support of our then soon to be released new album – Black and White 050505. With the odd exception of a couple of weeks downtime here and there, we have been traveling continually ever since and performing over 100 gigs while doing so. The forthcoming concert in Edinburgh which coincides with the weekend climax of the city’s Festival period, will however serve as our final performance for the time being with no other planned live work confirmed at present.

From a personal point of view I am delighted that Edinburgh will be our final post and I have many reasons why that is so. Primarily though, surely one of the main reason’s that has to be considered is that the venue itself is both really beautiful and quite unique! While that may be so it is still after all an outdoor situation and therefore we are hoping that we get the perfect conditions e.g. a late balmy summer’s evening, and not the typical Scottish downpour that I do admit to fearing. No matter, we will be prepared for all!

Interesting for some is the fact while Glasgow is our hometown, Edinburgh lying only 50 miles or so on the opposite coast, in some ways has played a bigger part both in the beginning and the continuation of the Simple Minds story. Not only did our first national press reviews come out of our many initial performances in the city, but it was due to the enthusiasm of local promoters Regular Music that we started to get the chance of making a name for ourselves during support slots for so many then popular bands – Jam, Generation X, Only Ones, Squeeze, 999. To name but a few!

Our only ever real manager, non other than Bruce Findlay, who for more than a decade gifted us with our first record deal as well as all his genuine wisdom and wild enthusiasm, is an Edinburgh man of course. Bruce – the perfect guru – in particular inspired me so much, that as a young man so keen to be near him and a few of his “gang” – I even moved through his side of the country to live! To this day I own an apartment there in what is a magical city, although I cannot pretend that I live in it!

In fact we still maintain an office in Edinburgh however, and it is where Sandra Dods and Gordon Smith deal fantastically with whatever chaos that both Charlie and I throw at them. Believe me, without their effort it is highly doubtful that Simple Minds would have lasted as long as we have. Finally as much as anything, it is through the drive and commitment of our technical crew, guided by production manager John Armstrong – another east coaster – that this tour has met with the success that it has. It has been an absolutely fantastic experience for all of us involved and although it is not within our collective nature to display that much emotion, it will be difficult to wish each other good bye at the end of the last night.
And that is as well because this is no real goodbye, more of a see you later perhaps! Because the one thing that this last twelve months has proven is that Simple Minds are still capable of improving and while that is so things really never stop for any real length of time.