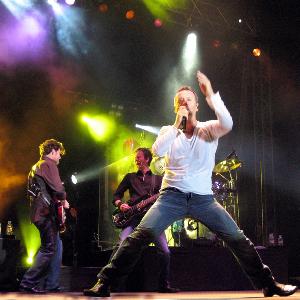 Anyone taking a close look at Simple Minds currently will surely not be able to suggest that creatively speaking at least – the band is in anything but great shape. This is not me merely blowing my own horn either, it is genuinely how I see it.

Released almost one year ago, Black And White 050505 really was the kind of potent album that we had hoped for. Although it was never going to dominate the popular charts it was the kind of committed and focused collection that had eluded us for more than a decade. In the end it was nothing short of the kind of creative landmark that told us that – far from being a museum piece – we really did have a future and that to a large extent it is up to us what we do with it.

The quality level of Black and White raised the bar and set the tone in redefining what we would and would not accept from ourselves within all our activities. And from then on it seemed that a renewed and stronger Simple Minds emerged throughout the tour that followed.

These months ahead will play a big part in determining how we carry on with our new determination. But it is difficult to remember the last time that there was such a feeling of buoyancy with regards to what the future may bring.

Of course the dust has hardly settled and the glare of the lights has hardly faded since our final show in Edinburgh earlier this week. And it is on purpose that we have avoided rushing into any instant new plans. My own thoughts is that it is better to leave at least a little gap between activities – almost like an open window wherein we sit a while and see what blows through or what new thoughts occur etc. For my own part the desire at present is quite simple. I want a few weeks break and then I want to get on with creating more Simple Minds music!

If anything, regarding the next album it is more a question of trying to keep up and surpass the standard of the current record I suppose. We were on such a good road with that record in my opinion, plus I feel that we never came to the end or exhausted that particular path by any means either – so why change tact when there is no reason?

Of course in terms of the live situation – well over the last twelve months we enjoyed ourselves so much while improving ourselves as a band along the way – that I cannot see us staying away from concerts for too long a period. At the end of the day “we are a live band” and what kind of “live band” can live without getting out and playing live for any length of time? You tell me!

Finally, we traveled far and wide over this year and not once were we given anything less than what we felt was an ecstatic response. Yes, every single night we had the most generous audience and for that I want to thank every single person who turned out to see us. It encouraged us immensely and I mean that fully. To play for you was a privilege and something that we will never forget!