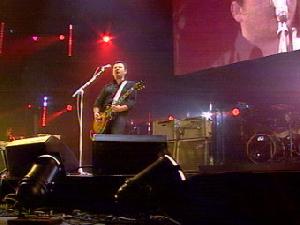 I bought it because I heard the song I Travel on an old Radio 1 session and I couldn’t reconcile it with the band that had done Don’t You Forget About Me.

You’ve got this vaguely soul voice making a cold, glacial, European album. There’s hardly any machinery on it. It’s one of the truly futurist organic records,cold-sounding but engaged – a massive contradiction but it works. It has the courage of it’s convictions from the first track to the last. I tried referencing it so many times on The Holy Bible and it didn’t work out.

You can’t understand what Simple Minds were after they made this or what they were before they made it – it came out of nowhere.

It’s like if somebody saw Robert De Niro in The Fan, they’d never assume he made Taxi Driver. It really is one of the lost British albums but nobody will ever quote it because they can’t stand the idea of a fashionable Simple Minds record.