Home > All News  > Opening The Doors 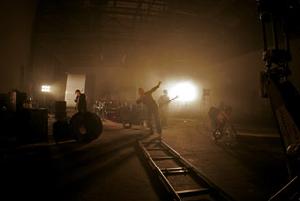 Yes, finally our tour rehearsals are over, and as the multitude of black cable leads – seemingly like puppet strings set to begin pulling us from city to city, country to country and even continent to continent – are packed away, it is only now that I have really begun to consider what lies ahead for us over the next year as we once more send ourselves around the globe wailing to audiences on a nightly basis.

Thankfully I do feel that we are well prepared this time. Or at least as prepared as possible, given that you can only do a finite amount of practicing and that  there  does come a point when you simply “need to bite the bullet” and get out to play in front of an audience in order to judge what is working and what is perhaps not working as good as imagined.

Rehearsals are after all a must for learning by rote, the melodies, arrangement and all the usual technical aspects involved in the plotting and planning involved in playing a great live set. But in truth, once you walk out on stage to do a set for real in front of  the public, you enter another reality that is difficult to describe, but is without doubt another world completely from the controlled reality of the rehearsal room. That said I have enjoyed these last weeks a great deal, where altogether as band and crew without available distractions, we got inventive as we lost ourselves in the music of Simple Minds. Excitedly choosing which songs to play over the next year we worked through arrangements – many of them new – for around 45 songs that were in fact edited down from an initial list of 60.

It was really pleasing to witness everyone in the room contribute ideas passionately to each and every day that we worked and I am confident that the kind of close band feeling that we created during the creation of the album sessions will continue throughout this tour. The commitment we get from all who work with us is unbelievable in it’s magnitude and I hope it is obvious to them how appreciated that sort of effort is. I am especially aware that for many who work for with us, the job entails leaving partners and children behind for excruciatingly long periods, what greater sacrifice could there be than that?

Even our keyboardist Andy Gillespie who is unable to make this tour and will as a result be replaced by Mark Taylor, managed a few days with us ensuring Mark a smooth handover. Regarding Mark himself, he is no stranger having toured a few times with us in the 90’s and apart from being immensely talented is very much the kind of  person we would want to have with us.

Leaving our Brussels hotel daily at around 11am and rarely returning before 11pm, these days and weeks have whizzed past ever so quickly and finally the time has come to pack up  We are extremely thankful to the the people of the little town outside of Brussels that allow us to use their theatre as a base for our rehearsals, and as a small gesture in return to the local Mayor, we responded on the last day of rehearsals by “opening the doors” to let local people wander in for half an hour or so while we played a few songs! How nice it was to feel the presence of some people in front of us as we played. We are looking forward to a lot more of that as this year unfolds, beginning of course in Dublin on Monday night.

Maybe see you out there somewhere!