Back In The USSA – Eddie 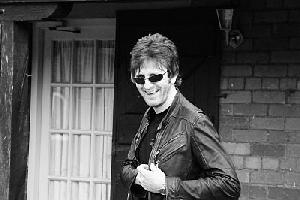 Back In The USSA – Eddie Duffy

As I gaze at the rolling Rocky Mountains from my home in Denver, the now familiar intense heat and clear Colorado skies feel light years away from the daily downpours and misty mornings of the green Welsh countryside. Although I have just arrived back, my three weeks recording at the famous Rockfield Studios are already beginning to feel like a distant memory or weird dream. I am jetlagged and exhausted, but with feelings of accomplishment, I cast my mind back to the beginning of August.

As I sat listening to the demos on my transatlantic flight to Bristol, I must admit, I had my doubts / insecurities, call them what you will. Jim and Charlie wanted to tackle this one differently. With Black & White for example, it wasn’t unusual for just Arjen Mensinga (our immensely talented engineer) and I to be in the studio together: just one musician, recording and overdubbing. This time round, J & C wanted to record as a band, a ‘no-nonsense’ approach which would hopefully capture the raw energy and magic we generate live. The last time we were all together was two years ago, almost to the day, when we played the final gig of our 2006 tour beneath Edinburgh Castle. Two years on, did we still have it? Were we still a good, solid, tight band? Could I do these ideas justice? Would Mel take two sips out of a Duvel and try and put my left leg behind my right ear again?

The demos were purposely left in as basic a state as possible. This was a plan to get the best out of us, to give us the space to be creative without feeling restricted or tied down to definitive parts or arrangements, and an opportunity to let one person’s vision or take on a song inspire the other’s. There is a natural chemistry that only occurs when a band plays together in this way, and it can take an idea in a million different directions. And it couldn’t have worked out any better.

After a pretty slow start due to technical issues, we were getting 2 – 3 tracks down a day, and they were sounding immense! It was very difficult to pick a favorite, but if you did, you would soon change your mind when you moved onto the next track. We had hoped to get 10 songs done in 3 weeks. Instead, we got 13 original songs down. I am now as eager as any one of you to the hear the final mixes once the legendary Bob Clearmountain sprinkles his fairy dust on them.

I miss the guys already: Jim, Charlie, Mel, Arjen, Hilko (wunderbar guitar tech and chef extraordinaire!), and of course, Jez, our indefatigable producer. I think we eventually cracked him though, with our constant barrages of downright cheek and general Glesgae banter.

Three weeks ago it was all ‘please’ and ‘thank you’. My last vision of him, just before I left for the airport, was of him down on one knee, doing a kind of strange version of the haka, screaming, “There’s your dinner!” (roughly translated as “I just beat you at cards and I’m rubbing it in your face”) at me at the top of his voice. We have that effect on people when the gang gets together. See you in November!