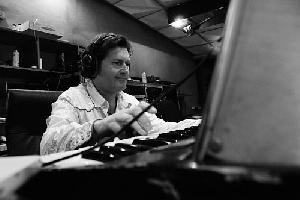 As our own recordings come to the finishing line, this week I have been listening to some parts of the new releases from Oasis, Verve, as well as checking in again with the latest Coldplay, Killers, efforts.
Putting aside the artistic qualities etc on display for the moment. Somehow and without even attempting to think about it, I was consistently struck by the feeling that what I was listening to were recordings that in general were very expensive to produce, and in all probability much laboured over – as in taking months if not years to complete.

I have no real idea at all if that is the actual case, but my experience makes me feel that that it would be so. We ourselves have within our past made records in that mode and in my opinion our music unfortunately never received much benefit from those conditions.

In fact I would go as far as saying that for the most part, having huge budgets and endless studio time at our disposal worked against us. And being able to deliberate no end on ideas without worrying about the tab and the clock ticking, lead us to lose the thread of what we were trying to do.

In the end it mostly served to dissipate our energy, boredom took over, and metaphorically it was as though we started to eat ourselves up creatively as we tinkered here and there with ideas that were probably just right to begin with.

How glad I am then currently to be back in the position were we have organised ourselves to the extent that our recording sessions will take weeks to complete, never mind many months, and certainly not years as it once did.

Similarly how noticeable it is to me that the album that has given me most pleasure recently – Oracular Spectacular by MGMT http://www.nme.com/reviews/mgmt/9519 sounds like it was knocked off in a dozen days in someone’s basement studio and is all so much more the wonderful for it.

Admittedly it sounds like a bunch of (genius) kids having a smartie party, rather than billionaires nagging themselves over how they can become zillionaires.

Is there something wrong with that?