‘Rockets’ on the Radio ! 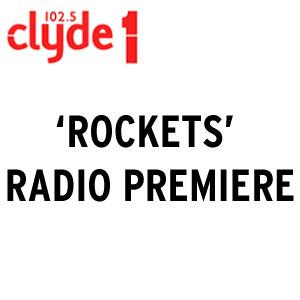 Posted at 20:04h in All News, Radio by Simple Minds
Share

Listen to this radio show right now in the FREE MEMBERS AREA!

We will never forget the sensation of hearing our music for the first time on radio back in ’77 when our local station Radio Clyde some played some tracks from what was our first demo recordings.

I recall completely as we sat around waiting somewhat in disbelief for the DJ to live up to the promise that he made earlier that week when he called to say that he liked our sound and would be playing the demo on his next show which was called Street Sounds.

Neither will I forget some years later when hearing ourselves on radio as we sat in a cramped mini bus driving into Manhattan from JFK airport where we had just landed on one of our early visits to the States. It was such an incredible thrill to hear ourselves blasting out as we navigated our way through the bustling streets of New York.

I wont be in the UK on Sunday 15th of March when on his weekly Radio Clyde show, the irrepressibly enthusiastic Billy Sloan is set to debut a track or two chosen especially to herald the release of our upcoming album ‘Graffiti Soul’. However if I was, I would certainly be listening in very excitedly and unashamedly so, it is after all not every day you hear one of your new songs make its world premier on radio.

One of the songs Billy is due to air is titled ‘Rockets’ and apart from anything else I am keen to hear how the new work comes across. I won’t hold back from saying that I personally love the track to pieces. It is in my book a sparkling piece of pop music that drove me nuts during last summer when I could not get the various hooks that underline it out of my head. Even when I was asleep I could hear the damn thing play on, then again is that not what good pop is meant to do.

The music to the track comes out of Charlie Burchill and Gordy Goudie, with Charlie adding all the elements to an arrangement that is originally built on a dangerous guitar riff belonging to Goudie. Just one of many he seems to have stored away, until a magpie like me comes along and makes off with it.

All three of us incidentally worked on ‘Home’, the track that announced our last album and a cool little tune it was as well. But in the end it is Eddie Duffy’s bass that is the clincher on Rockets, giving the track the irresistible Peter Hook type drive that Mel Gaynor was born to pound his toms on.

Of course I will love it all even more if it also appeals to those willing to give it a chance, that is why we go to the bother of releasing music after all.  We want people to like it or fall in love with it even, and if any artist tells you otherwise, I suggest you look closer to witness a nose growing visibly.

Only a couple of weeks ago I travelled round playing some of the new tracks to the various international record companies and to such a positive reaction. This is the first time we have worked with Universal Music and I felt it important that they could get a chance to feel our enthusiasm and get to know what our approach is to our work.

Something I definitely noticed while listening together with the executives in Bruxelles, Amsterdam, Milan and Berlin. Was that each time the second chorus of ‘Rockets’ slammed in, there was instant smiles and nods of approval throughout the room as evidently the track hit the mark that Simple Minds intended.

In that moment of course no one was smiling more than me, although I did in fairness a decent enough job of hiding it. Because music is not only a marvellous thing and a magical thing, but also it is a hell of a mysterious thing also. Or at least it is, in that you never quite know if it is going to have the effect on the listener that you hope for when you are creating it. However when it is obvious to me that it does just that, it is difficult to describe the glow of contentment that comes surging through.

See how we fared this time. Enjoy Billy’s show and I hope that you enjoy ‘Rockets”

Listen to this radio show right now in the FREE MEMBERS AREA!