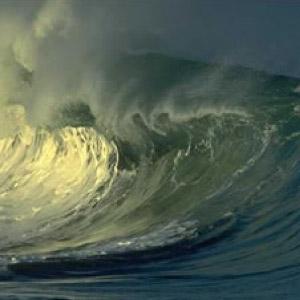 A lyric I wrote in the last few weeks of last year is titled Tsunami.
I did not choose to write it and in truth I feel that it chose me. It is not the first time I have felt that way about something that I have been involved in creating.

Thanks to the people I work with sometimes an abnormally powerful and impressive piece of music comes my way. Loaded with an atmosphere so vivid, that a story or a scenario seemingly tumbles out of the music as I listen often for the first time, Tsunami was a typical example of these occasions where something without a name seemingly takes over and pushes to be written.

For the record, Steetfighting Years, Belfast Child, Waterfront, New Gold Dream, In trance As Mission, Moscow Underground, are a just a few of the SM songs that emerged in the mode described.)
Arriving of its accord, with a mystery intact, as already implied I was full on consumed with what I was listening to on that dark December morning. Almost to the extent that I have little recollection now of what made me decide to respond, or why I chose to interpret the music in the way that I did.

In any case, as the minutes passed and the tangled pieces of possibilities unraveled themselves in front of me, I started typing and watched the first few lines go scatter gun across the page. In a very short time I had the feeling that a special song was taking shape, one that I would look back on and feel very grateful for the part that in which I played in helping it along the way.

Of course the reason why I bring this to light now is that along with everyone else back in early December, when this track was demoed, I had no clue what a song entitled Tsunami would mean to all who have been affected by the images from Japan over the last two weeks.

Regarding that tragedy, there are no words or lyrics that I know of that could really conjure up the scale of either the shock or the ensuing sadness that has naturally followed on from events that are, well, somehow beyond previous imagination.

Meanwhile, just this morning I listened once again to the demo of Tsunami – dated 12 December 2010. Sun was rising, a new day was coming into being, the seasons had changed, and likewise a very different set of circumstances were surrounding me from the ones on the day that the song originally took shape.
I was certainly apprehensive as the first bars of music faded out of the speakers, particularly in light of how I might now feel about the song since nature struck with a power unparalleled.

And yet…..it still felt  glorious……and the mystery of how and from where it appeared continues for me