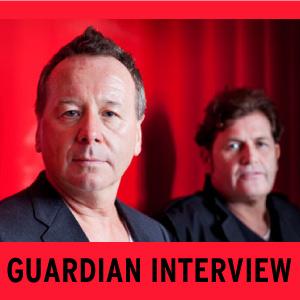 Posted at 10:27h in All News, Press by Simple Minds
Share

Simple Minds: ‘Maybe we shouldn’t have cashed in’

Before Simple Minds went stadium rock, they made ‘serious, dark music’ that influenced the Manics and Primal Scream. Now they’re returning to their roots

A couple of years ago a young, anonymous musician approached Jim Kerr in a Glasgow rehearsal studio and began humorously haranguing him. “He was like: ‘You guys lost it, man, having all those hits, playing all those stadiums. I would never do that.’ And I said: ‘Well, you might not have that dilemma!'” Kerr laughs. “It’s nice to have the choice, to try it and see where it goes. But I understand that for a lot of our audience it was too much of a jump.”

Looking trim in his grey suit and black v-neck, sipping water in a west London hotel, the Simple Minds singer hardly seems like a man troubled by what the world thinks of him. But he is, a little. Kerr is keen to remind us that before Simple Minds filled stadia with windy words and oversized anthems they were once a truly fantastic band.
Their first five albums (counting 1981’s Sons and Fascination/Sister Feelings Call as a single entity) are collected on a new boxset, x 5, and they sound brilliant: an unsettling, oddly contemporary blend of krautrock, art-rock and flinty electronic dance music made by a band in a state of accelerated evolution. Bobby Gillespie raves about the “really hard European disco” of their second album, Real to Real Cacophony. The jagged, alienated aesthetic of its follow up, Empires and Dance, was co-opted by Manic Street Preachers on The Holy Bible. “Empires and Dance and Real to Real Cacophony,” sighs Manics singer James Dean Bradfield, “there’s no one to touch them.”

Though Simple Minds were later labelled the “Scottish U2”, it was the Irish band who sought to mimic the ecstatic, ambient glow of 1982’s New Gold Dream on their Unforgettable Fire album. “We were three albums ahead of U2,” says guitarist Charlie Burchill who, with his gold chain and patterned jacket, looks more obviously the middle-aged rock star than Kerr. “Comparisons were made on status and size, but I don’t think you could get two more chalk-and-cheese bands.”

Rebranding and repackaging isn’t unusual these days, but Simple Minds’ desire to retrieve their past goes deeper. At each date on their new tour they will play five songs from each of their first five records, nothing recorded later than 1982. Burchill can hardly contain himself, while Kerr glows at the thought of performing obscure album tracks such as Today I Died Again. “You can’t go back,” he says, “but you can embrace the old spirit. We feel obliged to shine a light on that stuff because it’s good, but also because a perception of Simple Minds that’s been hidden or ignored might come to light.”

The remaining original members, Kerr and Burchill will spend 2012 challenging misconceptions. “People think it’s all anthems and big gestures, and I’d love to redress that side of it,” says Burchill. “There’s a lot of serious, dark music.”

Simple Minds formed in Glasgow in 1977, and in the early days they felt a kinship with Suicide, Joy Division and Can. They wanted John Cale to produce their first album but “he’d gone mental,” says Kerr. In the end, Life in a Day portrayed them as a polished, rather derivative new wave band. “The record company thought that’s who we were,” says Kerr. He recalls listening to Joy Division’s Unknown Pleasures in the band’s van. “I was like [he puts his head in his hands and groans]: ‘We’re the Boomtown Rats! This is fucked!’ We needed to quickly get back to being this searching thing again. Within six months we’d recorded Real to Real Cacophony.”

Their second album is lots of things, but it’s not the Boomtown Rats. The aural equivalent of getting lost in a hall of mirrors, it’s a semi-improvised mix of world music, sinister electro-funk, edgy post-punk and experimental instrumentals. Empires and Dance is even better, using sequencers and industrial textures to create a unsettling disco-rock travelogue. Touring Europe in support of Peter Gabriel, one step ahead ofat a time of terrorist bombs and the Baader-Meinhof, Kerr became “mad with it all”. “Going through these amazing landscapes my head was full of movies, books and characters,” he says. “Being in a group is hyper-reality. You have to invent myths. As the singer, that’s your job. From first thing in the morning to last thing at night my head was full of it.”

What else were they full of? They sound utterly wired on those records. “We were speedy,” nods Kerr. “Loved it. Driving to Rockfield with 20 grams. We didn’t like sleeping. Or eating. That changed! There were two or three heady years, but it wasn’t a dark time. It was an innocent, young thing.”

When people talk about loving “early Simple Minds” the implication is clear: they were a good band who went bad. After New Gold Dream they became a very different beast. Derek Forbes, whose intense, circular bass was so key to their sound, left. The music became more muscular, less intriguing. They had a US No 1 in 1985 with Don’t You Forget About Me, recorded for brat-pack movie The Breakfast Club, and became a juggernaut, rolling through Live Aid, Mandela Day, Belfast Child, towards irrelevance.
Kerr recognises “a crossroads. There’s loads of reasons why, but you just can’t compare 1981 to the age of MTV. The game had changed and so had we. Once we’d gone to America there was a sense of: ‘You know what, why don’t we just break it here? Why can’t we?'”

You cash in a lot of kudos when you go chasing the big American dream, I suggest. “You do, really.”

Does he regret that? “Regret is a strong word because it implies that you carry it around, and I wouldn’t say I do. I’d hate to seem begrudging of success, but at the same time I’d like to be honest enough to say maybe we shouldn’t have cashed in all the chips. It’s a bit overwhelming when your band is no longer your own, you become an industry within an industry, but I’m very wary of going ‘poor us’. C’mon, it’s what you dream of. We wanted to be a great band and take it around the world, that’s still what we work for.”

During this period Kerr married and divorced first Chrissie Hynde, then Patsy Kensit. The latter relationship, in particular, made him tabloid fodder. “A pop star marries a starlet,” he says. “Double bubble!” Though he admits he “fucking loves” the lifestyle of the successful rock star, high-altitude celebrity status grated. “I remember Patsy and I had a fight one night,” he says. “We’d been invited to dinner at Michael Winner’s, Arnold Schwarzenegger was there, all that, and I said: ‘I’m not going to fucking Michael Winner’s’. She said: ‘Don’t you understand, it’s my job to go there.’ And I said: ‘Don’t you understand it’s my job not to go there? It’s completely naff.’ There was a bit of that, though we laugh about it now.”

If such distractions further diluted Simple Minds’ outsider identity, in recent years they’ve tried to reconnect with their early spirit of adventure. They are recording tracks with Gong’s Steve Hillage, who produced Sons and Fascination, for an album planned for next year. Returning to this era “just feels right,” says Kerr, who promises the shows will be “a real attempt to conjure up that atmosphere. We’re trying to get the original sounds, it’s got to reek of those times. We need it to be great for ourselves, but also for people who have been looking forward to hearing these songs for a long time.”

For that to happen, he might have to rein in the old excesses. Kerr was never the most technically accomplished singer, but on the early records he provided a still, atmospheric focus for the music’s intensity. At 52, comfortable, happy, can he successfully inhabit these songs again? “I’ve got to unlearn things,” he agrees. “I can’t be the cheerleading man that I became, that’s not what this is. Back then we were coiled, the power emanated from all of us and washed over you.” He pauses and gazes out of the window. “I’m looking forward to seeing that effect in motion again.”