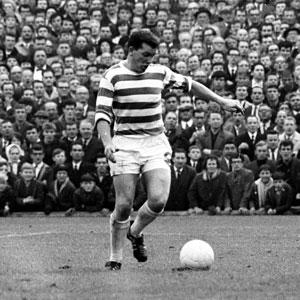 Unfortunately we cannot be in Glasgow tomorrow on the sad occasion when they lay to rest Joe McBride. As a 6 year old who was then just getting used to being taken regularly to Celtic Park, I had the great privilege to see a great team of local guys come together. Joe of course, more than played his part in that team by breaking scoring records – and seemingly with great ease at that. Like many players who played for the Old Firm teams back then, had Joe been playing in these current times it is impossible to imagine the kind of monetary value they would put on him. But those were different days, days when footballers earnings were quite average at best. Which would also explain how Joe also lived in the same street that housed my family in Govanhill, Glasgow.

Over our adult years, both Charlie Burchill and I met Joe on a number of occasions and it always surprised me that someone who was so fearsomely good, could carry himself with such a humble demeanour. He genuinely seemed a very nice man, even more reason for my huge admiration to continue. They say rather negatively, but perhaps with some wisdom, that you should never meet your heroes. Nonsense. In this case, I am so glad I met one of mine.