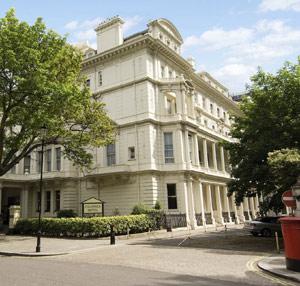 There are innumerate things that can hit you as you go jogging thru Hyde Park. Frisbee´s, tennis balls, football´s, falling branches, as well as the smell of candy floss and the inevitable hotdogs etc.

If it is a particularly sunny morning, as it was yesterday, you can also get struck by the reality of how beautiful the place is as you head towards the Serpentine and then onwards to whichever point that you choose. If you have never been there, do go if the opportunity comes your way.

The thing that hits me most powerfully however while circuiting the park is the wave of nostalgia that strikes as I make my way (rather slowly, let´s be honest!) up Bayswater, and on to the home straight of Kensington High St – my usual starting point. And the central image that causes this “wave of nostalgia” is none other than the white stucco building that is called the Columbia Hotel. Otherwise known to Simple Minds and many other provincial groups as our “home from home”, throughout those years that span from the beginning to the mid 80´s.

The Columbia not only provided us with food and shelter – at a modest and affordable price – back then. It also tolerated us when we raised various incarnations of hell.

Even more generously, it also turned a blind (ish) eye when we helped ourselves, obviously without authorization, to the goodies in the kitchen, as the horror of “munchies” struck, most often bang in the middle of the night. The night porter, snoozing unaware, as most of the contents of the fridge from hotel kitchens were smuggled upstairs to our rooms.

There is much more I could go about re Columbia memories, both savoury and maybe a little un-savoury. But perhaps it is better for the sake of our children, to keep schtumm. Let sleeping dogs lie etc. The one thing that cannot be left unsaid is how well the owner´s and staff treated us. How kind they were in letting us off the hook throughout. I should also say how happy we were while there. Homesickness was never a thing that had any impact within our camp and “Columbia life” was above all, great fun. Those were very happy and very creative days. (The hotel was where most of the lyrics for NGD and Sparkle In The Rain were written.)

As ever, it is not possible to believe that a whole thirty years ago this month, we would have been under that very roof. Wide awake most hours of the day, scurrying around here there and everywhere, taking in all we could from 24hour London. Well, it might have been three decades ago, but I can clearly right now recall, Derek Forbes, Mick Mac Neil and of course Charlie Burchill, sitting in the corner of the small hotel bar, falling over laughing at whatever. Not a care in the world between them. Little geniuses, all three!