Standing On The Shoulders…

Home > All News  > Standing On The Shoulders… 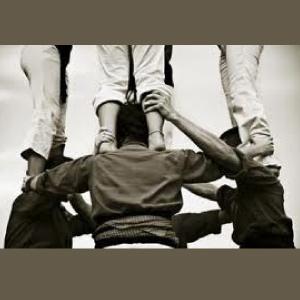 Throughout years of commenting I have hopefully succeeded in establishing that Simple Minds continue to exist due to the efforts of everyone who has worked with us. That some played much bigger parts than others may be evident, but there is no getting away from the fact that we benefitted from everyone who has given their talent in whatever way as support to our vision. Those contributions will always be recognised, least so by us.

Producers and engineers we have worked within our lengthy career certainly helped in making us whoever we were, are, and whatever became. They brought colossal amounts to the records, more than most are able to imagine and rightfully so they are credited in ways that are to be expected. Likewise, the artists/photographers and graphic designers who worked on the various album artworks, helping us shape a strong visual identity that we hoped would be compatible with the style and vision of Simple Minds songs.

The crewe’s who have carried us nightly, throughout thousands of concerts and countless miles over the last three and a half decades, hopefully know we appreciate how much they have given in helping us become the potent live act that we try to be. They are the ones who prepare the best conditions entirely for us to give 100%. Thanks to them we have no excuses.

Similarly with the managers and assistants, lawyers and accountants, promoters and agents who have all worked with SM. They fight for every important detail and usually win on our behalf. Alternately, we suffer together if things don’t come up to scratch in ways we consider acceptable.

The record companies and publishers who invested in us could never be overlooked. Even more, the individuals who worked for those companies but somehow always tried to give us priority. Often caring about SM as much as many of our fans do. Unbelievable!

There is however a whole other role call of individuals who we relied on very much, particularly in the early days when we needed all the help we could get. They comprised family members, friends, acquaintances, and neighbours. They would do us all kinds of favours, lending a hand, a car, some equipment, a rehearsal place, or a little money even, all of which we needed desperately to get our then fragile outfit up and running. These were people who did things on our behalf purely for the reason that they liked us and maybe got a kick out of our big idea – that we wanted to create something that was could become world known. They were all heart. Unfortunately, sometimes we were all take.

Nearly all who succeed mostly rely on the efforts and goodwill from others. They could never do it on their own.

Neither could we. Meanwhile we are still standing on the shoulders of so many.