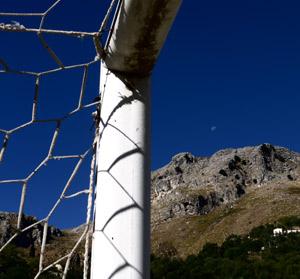 About a 10 minute scooter ride, climbing high above Taormina. There is a desolate and unkempt football field that lies at the foot of Monte Venere. In all my years of going there, it is so rare that I see anyone and that was very much the case earlier this month when I went to train most mornings. That said, for a while I used to see one of the locals. He was an elderly fellow, and being of a fair age, was most proud to demonstrate that he could train on a few days each week. And all of this despite him having pretty messed up knees, and more seriously, having had bravely seen off various cancers.

Unfortunately I have not seen my “old training partner” around recently. But I hope with all heart that he is okay. For as much as I enjoy the solitude of circuiting the field repeatedly, his presence always inspired me to do more than I would normally. He enabled me to set new fitness goals.

One thing for certain was that he reckoned he never felt anything near his age. Repeatedly expressing the fact that he could not really believe that he was the age that his birth certificate made him out to be. Within that notion we shared a common feeling – outwith our fondness for circumnavigating the perimeter of a field and getting dizzy with the aroma from the eucalyptus trees – that is.

Truth is, I also find it easy to forget my age, as long as I am not looking in a mirror. And comically, whenever I am running around the aforementioned “campo sportivo,” wearing a football kit, and probably getting a little too much buzz from the body´s own opioids. I almost feel transported myself. Transported back that is, to the kid I once was, running around the school playground most mornings before class began. In that sense, all the passing years no longer register, and albeit for a lonely few moments, gloriously spent amid the hills above the Ionian Sea, I simply cannot believe I am the age that my passport confirms.

The recent live 5×5 shows that Simple Minds played this year had a similar type effect on me. Playing those songs that we wrote when we were barely adults, hurled me back in the strongest way, enabling me to recall most vividly what it originally felt like when we set out, not only to experience our first tours, but to engage with the challenge of becoming the great live band that we are still determined to be.

I am sure you will agree with me that music has a mysterious and powerful way of transporting us to a time and place that we associate deeply with certain songs. How does that work? I have no idea, it´s mystery unsolved, and I am more than happy for it to remain that way.

I am not happy however to not know how my old friend is keeping. Tomorrow morning I intend to make a few calls, seek his whereabouts. In any case I get the feeling he is just fine.