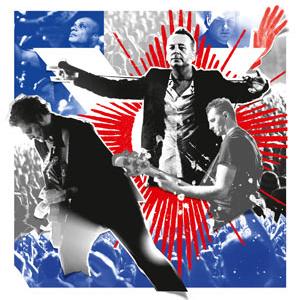 Ever since I started to take an interest in going to see live bands, likewise I became interested in live albums. All of which stands to reason of course. For it makes complete sense that had you witnessed a performance that had impressed – so many in my case – then the chances would be that you would most likely not be averse to having a souvenir of the event.  In fact, something easily available, that you could play again and again as you reran the memories of whatever remarkable show you had the fortune to experience, was probably something that you would cherish. Albeit in a different way from the studio recordings that gave so much initial pleasure, live albums, were very much made for and appreciated by “the real fans”. The connoisseurs, no doubt!

Lou Reed´s “Rock n Roll Animal”, “Genesis Live”, and “Bowie Live at Santa Monica” were among the first live recordings that I listened to incessantly. Live recordings from Bob Marley, The Velvet Underground, The Who, The Doors…and ahem…..Deep Purple, were soon added to that list. As the years rolled on I immersed myself in great live albums from Dylan, Springsteen, Gabriel, Prince and U2.

And the fact is, I still do.

Oppositely, I have never been that much interested in the filmed versions of live concerts. Of course there are some good ones, but none that have the same effect on me as listening to the sound recordings only, for it is with these recordings that I can almost seemingly close my eyes a few seconds and relive what it was like to be in the venue when the songs were performed live on the night.

Back in the day, naively or otherwise. I had the impression that only very specialised artists released live albums. In other words, only those who could “add something much more to their work” when it came to playing live, would chance their reputation by releasing a live album, by putting it out there for the public to judge. I still feel that somewhat.

Today is a special day for Simple Minds. It is not everyday that we release an album, and it is certainly not everyday that we release a live album. The last time we did was a little over a quarter of a century ago, and the reason we did was that we were very proud of the then live impact of Simple Minds and wanted everyone to know about it. More than that we really wanted to give our fans a great souvenir of the shows that they had shown such enthusiasm towards.

SIMPLE MINDS LIVE IN THE CITY OF LIGHT

25 years later, on this day we release “Simple Minds 5×5 Live”, the reasons for doing it so are the same. If you enjoy listening to it as much as we enjoyed putting the set together then you are undoubtedly in for a most special treat.