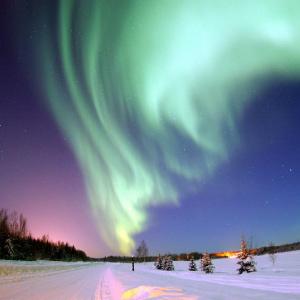 Posted at 01:00h in All News, Jim's Diary by Jim Kerr
Share
Almost a year ago Simple Minds travelled 350 kilometres north of the Arctic Circle. Our destination was the Norwegian city of Tromso; the mission was to take part in the city festival. We spent a few days only, but it was sufficient time to know that thanks to the natural environment etc – we were in a remarkable part of the world.
On arrival, we had immediately made plans to try and get out into the countryside later on that evening. Reason for this, was that we had been told that although no guarantee, there was maybe a chance to see the mysterious and spectacular Aurora Borealis, perhaps more commonly known as “The Northern Lights”.
The idea of witnessing this cosmic event from within the artic circle has huge appeal to me and I was really excited with the prospect of meeting up after dinner to go out “Midnight Walking”. Oh I should mention that the temperature was well below the rather mild zero that we frequently experience during Scottish winters. Man, it was cold!
In any case, after heading up into the hotel gym, and then after having a chat with our lighting engineer Steve Pollard, I went back to my room to listen to a piece of music that Andy Gillespie had let me hear earlier that day. Not much more than a loop that ran for a couple of mins, but it had a great upbeat feel, it was insanely catchy also.
I recall not much more after this as I then fell into the deepest sleep, only to be woken a few hours later by none other that Charlie Burchill informing that we had been told that if we jumped into a car and drove out of town, the “chances of seeing the lights” were 95%.
That sounded great. But being so tired, groggy even, I could barely move. I told Charlie to count me out, no other option other than to wish him well with “The Midnight Walking”, freezing cold, as it would be. I put down the phone and immediately went back to my obscure dreams.
I may have then “slept the sleep of a thousand sleeps” and was grateful for it. But at 4 am I was wide-awake, which no big deal really, as usually I get up between 5 and 5:30 am most days. However it is not everyday I wake with music pounding through me as it was on this occasion. Neither is it everyday I grab a notebook and start writing words – before I have even showered. But I did on this dark Tromso morning and I am ever so glad about that.
Later that day, after soundcheck and before the show, Andy Gillespie brought a microphone to my room. We recorded some of the words I had written that morning and matched to the music that he had given me only 24 hours prior
Sometimes an idea takes a while to take over, and to be honest, with so many musical ideas flying around, it is common that some ideas get lost a while. It is then that fate sometimes takes over, or more realistically, an idea somehow forgotten magically turns up randomly on an mp3 player that has been lying around untouched for months.
Making you then stop in your tracks, and thinking, Wow! Such was the recent case with that “Tromso Tune.”
Yesterday in Real World studios, along with some other songs, I finally got to work a little bit more on Andy´s tune. Unfortunately I did not get to see nature do it´s most wonderful show that night in Tromso. Charlie and some of the rest did though. Lucky guys.
But I did come out of it with the backbone of an exciting new song. It is called “Midnight Walking” and it is buzzing around my brain as I write.
Jim Kerr