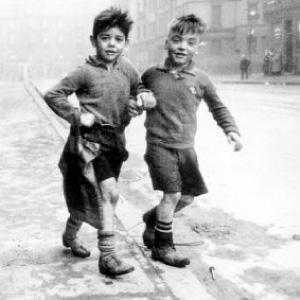 Posted at 16:39h in All News, Jim's Diary by Jim Kerr
Share
“How else do you account for the return of the fountain pen–as an object of consumer luxury–in the age of the computer, when we have all but forgotten how to write?” A good question no doubt.
Likewise and more in context with this site, how do you account for the on going resurgence in demand for music on 12inch vinyl when hardly anyone has a record player, and with a couple of clicks on a keyboard you can probably access the entire history of recorded music? Nostalgia – might not be the entire answer to those questions, but it must surely figure large in any credible answer, even if it not so easy to actually describe fully what it means.
There are, of course, many ways to look backward. You can look and reject. Or you can look and linger longingly. Within our latest recording of Broken Glass Park, available for you to hear from this week, it will be fairly obvious that the lyrical theme is based unashamedly on a personalised nostalgia that presents views from a past that although based on truths, will inevitably have been idealized as I gazed back to a time and place that seemingly no longer exists externally. But lives on forever within me.
Many of the new songs we are working on currently, as in over the last few months, have lyrical themes that first took shape around three years ago. For much of that period I was back in my hometown of Glasgow and very happy to be there, even if the reason for my relocation was overwhelmingly sad. Such was the case as we prepared ourselves for the last six months of my mother’s time with us.
And yet it was an incredibly prolific time also as I worked in Glasgow honing and preparing things for the release of my solo work with Lostboy! AKA, as well as working on various new collaborative songwriting partnerships with Owen Parker and Iain Cook, both of whom have contributed to new Simple Minds material.
On the morning that I finished work on BGP, I was staying – sleeping and working – in the guest room at my parent’s house, and so engrossed as I had not yet left the room to go down stairs and make my usual pot of coffee, or get out jogging around near bye Linn Park, always a pleasure. All sense of time had left me in fact, as I listened repeatedly to the track, chopping and changing lyrical phrases, looking for buzzwords as well as the need to get it all just perfect enough. It may have begun life as an idea for my solo work, but I knew instantly that I was writing a song partly about the genesis of Simple Minds and a song surely then destined to be recorded by Simple Minds.
It was then I was startled by the knock on the door and my mother’s voice asking me if she could enter. Before I could answer she was already standing in front of me, coffee in one hand, fruit salad in the other. Firing questions a dime to the dozen. “That sounds really great. I love it. What is it called? Will you record it? Can I get a copy? What does Charlie think? Will it be a single?” And then she took a pause, and with her skinny wee face and huge blue enquiring eyes, stared into me and asked. “What is it about?”
“I don’t know.” I shrugged. “It’s nostalgic and it’s about all of us when we were growing up. Me, my brothers, our pals….the band. Hanging around Queens Park. Growing up in Glasgow. It is also about what fucking great fun we had!
“Hey you, watch your bloody language!” She snapped.
And then turning to leave she smiled and laughingly said.
“The Minds are great!”
Jim Kerr