Simple Minds Will Play On Hogmanay!

Home > All News  > Simple Minds Will Play On Hogmanay! 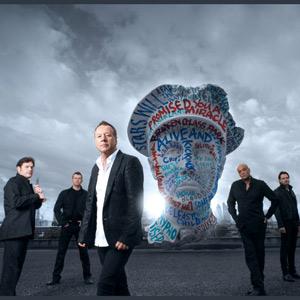 Posted at 15:50h in All News, Live News by Simple Minds
Share
Just announced Simple Minds will play a very special Hogmanay concert in STONEHAVEN, Scotland on New Years Eve this year!
The show will take place in the Market Square and tickets will go on sale from 09.00am [UK time] Friday 7th of June.
It’s worth noting that 1,000 tickets will go on sale, in person only, to locals at Stonehaven Morning Market this Saturday.
Press release:
STONEHAVEN HOGMANAY FESTIVAL  –  MEDIA RELEASE
ROCK LEGENDS TO PERFORM AT  STONEHAVEN SHINDIG
A SMALL town with big ideas has signed up Scots rock giants Simple Minds to headline its Hogmanay party.
The chart toppers are to play  in the New Year at Stonehaven’s  hugely-popular Open Air In The Square event on December 31st.
The Market Square party –  which runs in tandem with Stonehaven’s world famous Fireballs ceremony in the nearby Old Town – attracted 5,000 revellers from home and abroad last year when the Red Hot Chilli Pipers topped the bill.
This year it is hoped the stadium stars, boasting a career which spans more than three decades, will attract even more people to the Aberdeenshire seaside town that has a population of around 10,000.
A Simple Minds spokesman said the group were looking forward to celebrating New Year with their fans at the home of the unique Fireballs swinging festival.
Spokesman for Stonehaven Festivals and Events Committee,  David Lawman, said: “This is simply a dream come true for us. We are thrilled and delighted these music legends have agreed to come to Stonehaven for our big Hogmanay party.
“Last year when we revealed our plans, they said it couldn’t be done.  But with a great deal of effort from our small but dedicated team of volunteers, we pulled it off in grand style, staging a Hogmanay party that was a complete sell-out and second only to Edinburgh.
This year we will be bigger and better … and once again help boost Stonehaven’s economy.  Already two of the town’s hotels are fully booked and requests for tickets have been received from the USA and Europe and we hope to provide all age groups with a memorable night.”
The event will cost more than £200,000 to stage and this year the organisers are looking for as much sponsorship aspossible from local and national businesses, including the chance of company VIP packages.
From June 7th general release tickets will be available online at  www.stonehavenevents.org  and from Celtic Chords music shop in Stonehaven’s Barclay Street.
Adult tickets are £30 and under 12’s are £15
[a booking fee will apply]
The organisers  also intend having  support acts to keep the party swinging until Simple Minds take the stage.  This year the family festival  will be spread over two days with a celidh on New Year’s Day and other events.  It is also hoped to lay on bus transport from various outlying areas from Aberdeen to Montrose.
Simple Minds are frontman Jim Kerr, Charlie Burchill, Mel Gaynor, Andy Gillespie and Ged Grimes.
Best known for their 1985 number one hit “Don’t You (Forget About Me)” from the film The Breakfast Club,  Simple Minds evolved from a post-punk art rock band influenced by Roxy Music into a grand, epic-sounding pop group along the lines of U2.
The Glasgow band have achieved six No.1 albums in the UK as well hitting the top spot in countless other countries including Germany, Italy, France, Spain, Australia and New Zealand. Boasting a career which spans more than three decades, they recently released “Celebrate – Greatest Hits +” which includes hit singles “Alive and Kicking”, “Don’t You Forget About Me”, “Belfast Child”, “Waterfront” and “Promised You A Miracle”.
A recent concert review said:
“There are no flashy instrument changes, no self-indulgent solos, just hit after hit from a career spanning more than 35 years. Highlights for the fans came thick and fast.  The tempo was relentless. It was a night to savour a band who can still deliver in magnificent style.”
“This builds on the success of last year and the long standing spectacular tradition of the Hogmanay Fireballs.”
William Munro, Aberdeenshire Council’s Area Manager for Kincardine & Mearns said:
“I commend Stonehaven Festival and Events organisers for their vision with such an ambitious high profile event, really putting their town on a national stage. We look forward to working together with the community on this and other projects.”