Best Venue In The World? 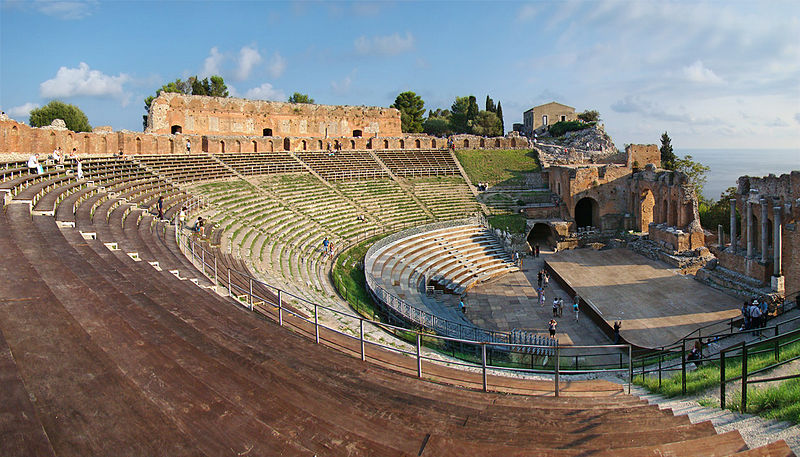 Posted at 18:30h in All News, Jim's Diary by Jim Kerr
Share
I am always getting asked – what and who is you all time favourite song? Artist? Album? Gig? Venue?
Such simple questions, and yet due to an abundance of possibilities, they are never that easy to answer. Being so, my answers vary in accordance to mood and depending how clear my memory is at the given time.
For the moment I will leave the other questions to the side and instead say a few things about my most favourite venue, both to perform in and indeed to go see others perform. It is without doubt the Teatro Greco in Taormina, Sicily, and the reason I have chosen it above so many other candidates is also due to the fact that more than anywhere else it is probably the place that I like to go to most when I want see a concert, film, ballet or opera. That I have had the chance to be on stage there, performing on a number of occasions, is more than a fantastic bonus. It is an honour in truth. And surely Simple Minds gigs there to date have been amongst our best ever. That of course is saying something considering that there is literally thousands – from places all over the world – that you could chose from.
Unfortunately I don’t have the talent to put in words a description of the Teatro Greco that could do justice. You can see for yourself.
More than being a venue, “Teatro Greco is a most amazing monument and one of the most celebrated ruins in Sicily, or indeed Europe for that matter, on account both of its remarkable preservation and of the unsurpassed beauty of its situation.” If you have had the inclination to click on the link provided, you will agree that hyperbole is not necessary in that description. Where else do you see a show that has an active volcano as a backdrop?
Which shows have been witnessed that made my choice so conclusive. Well, Bob Dylan’s show at The Teatro is remembered almost mythically, as is Peter Gabriel’s. Whereas, Paul Simon’s concert was amongst the best I have ever seen anywhere. Robert Plant typically performed like a true Zen Master at the Teatro. Or, was it a Whirling Dervish come to think of it? In any case I expect no less of the mercurial Patti Smith, when she plays there this year on the 31st of July and both Charlie Burchill and myself are really looking forward too seeing her perform live, after many years of anticipation.
And on the subject of anticipation – Simple Minds for the Teatro Greco, Taormina, Sicily, in July ’14?
Let’s hope so! Who knows if it is the best venue in the world? It is though, undoubtedly the most romantic.
Jim Kerr
http://www.teatrogrecotaormina.com