Meeting The Band at Newmarket!

Home > All News  > Meeting The Band at Newmarket! 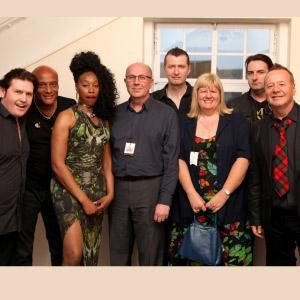 Posted at 18:47h in All News, Competitions by Simple Minds
Share
Great pic of our competition winner Steven Bellis and his girlfriend Gillian meeting the band just before they go onstage at this summers Newmarket show.
Steven answered correctly that Newmarket is in Suffolk and thought David Bowie should cover “Someone Somewhere In Summertime”, with his reasons being “I reckon Bowie could cover it in a slow building soulful arrangement (a la ‘Slip Away’ from his Heathen album)”. He also pointed out that the Newmarket gig is on the Summer solstice so is particularly appropriate.