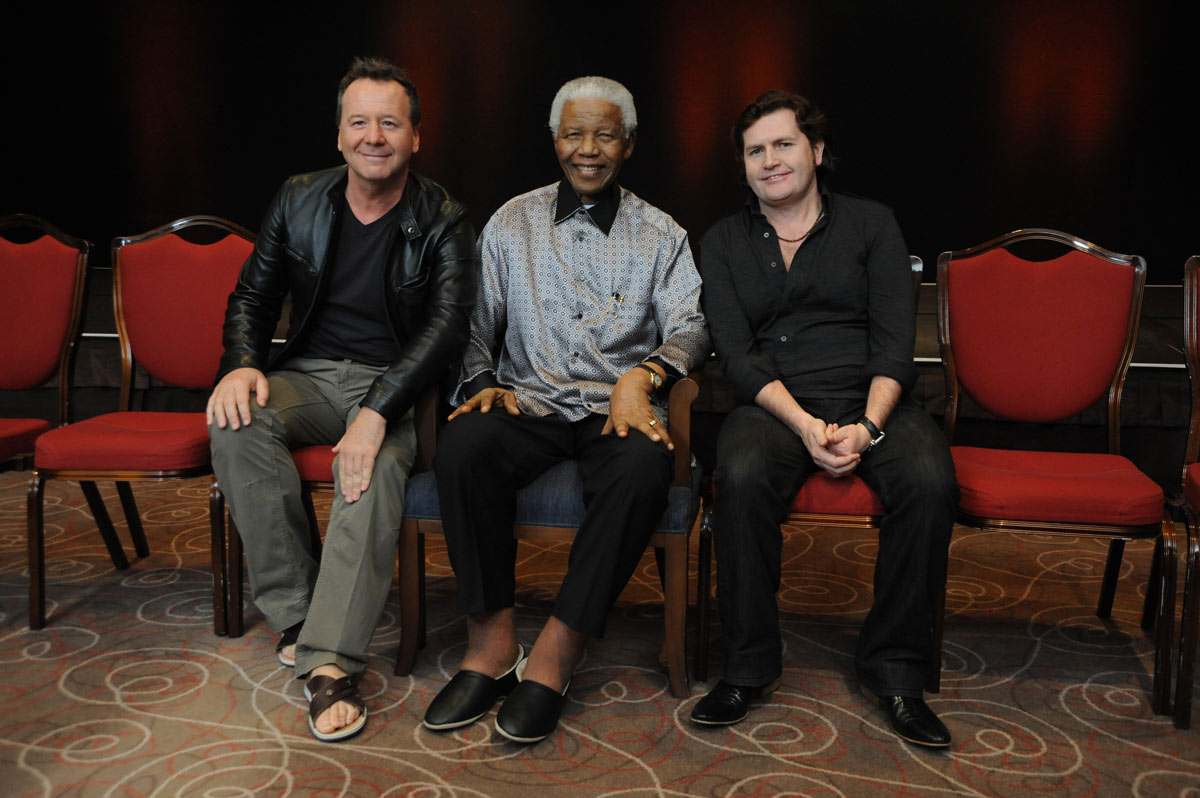 Posted at 22:32h in All News, Jim's Diary by Jim Kerr
Share
“To so many of our generation, Nelson Mandela was both an extraordinary and inspirational human being. I am confident that nothing, including the sad news of his passing, will change that. It was an honour for us to have met him in 1990 during the final stages of a worldwide campaign that called out for an end to apartheid. His reputation may have been larger than life, but he seemingly remained humble throughout.
Of all the thousands of concerts Simple Minds have taken part in over a career that to date has endured more than 35 years, the most memorable for me is the The Nelson Mandela 70th Birthday Tribute that took place on June 11, 1988 at Wembley Stadium in London. The event which was broadcast to 67 countries and an audience of 600 million was according to Robin Denselow, music critic and presenter of the BBC broadcast, “the biggest and most spectacular pop-political event of all time, a more political version of Live Aid with the aim of raising consciousness rather than just money.”
As for our involvement in the event, and perhaps on a more personal level, my involvement with the Anti-Apartheid Movement, the latter most probably began somewhere around August 1981, when Mandela was awarded the Freedom of the City of Glasgow. That the officials of my hometown would award such prestige to a political prisoner in South Africa somewhat galvanized my interest in a situation steeped in shame, a situation that our own UK government at the time seemed to do nothing more than pussyfoot around while offering words of disapproval, but very little else.
Nelson Mandela therefore became the symbol, a focus for many of us increasingly more intent on doing whatever we could in calling out to those in power to do everything necessary to end the distortion of human rights that was endemic to apartheid. Many cities in the UK followed on from Glasgow and similar awards were made by 50 councils and local authorities over the next decade. Meanwhile, the Anti-Apartheid Movement urged Britons to send postcards to the jailed leader, which they did in their thousands.
In the spring of 1988, fellow musician Jerry Dammers of The Special AKA, approached us. Details of the planned Wembley concert were discussed and in no time Simple Minds had agreed to take part. I believe that we were the first act to commit; I also believe that we were the only act to write a song specifically for that event.
‘Mandela Day’ was written in five minutes, such a lovely tune. It’s more about a sentiment. Political songs have to have memorable tunes. We thought everyone taking part in the concert was going to write something. I don’t know what happened to everyone else’s songs but we are glad that ours is still out there and is still symbolic of that time.
I’m so glad we did it. I’m so glad we had the balls to get involved because you got criticism then. It can be a rather clumsy thing to do, try and take some huge issue and put it into a three minute song. But I remember when Mandela was eventually released and came to London for the first time in 1990. There was a celebratory concert for him, Nelson Mandela: An International Tribute for a Free South Africa. He talked to about a dozen artists in the room. He said something that has stuck with me ever since. ‘When we were in Robben Island, when there was no voice allowed, we could always feel and hear the voice of the artists, and it gave us great sustenance. I though ‘wow!’. If Mandela says it, then that’s good enough for me.
That’s why we can play ‘Mandela Day’ now and, as much as it’s about Mandela, it’s about Tibet, it’s about wherever there is prejudice or oppression. In June 2008, we did the 46664 Concert Honouring Nelson Mandela at 90 in London’s Hyde Park. The Soweto Gospel Choir joined us for ‘Mandela Day’ and we met Mandela again. I treasure this photo of him with my bandmate Charlie Burchill and me.
For me, the underlying musical power of ‘Mandela Day’ will always convey more than words how much of an inspiration Nelson Mandela was to us and so many of our generation.”
Jim Kerr of Simple Minds