Posted at 12:27h in All News, TV, Videos by Simple Minds
Share

Added: Watch the behind the scenes video here of Simple Minds on the BBC One Show.

Just a quick note to say that Simple Minds will be performing on the ‘BBC TV ‘One Show’ tomorrow Tuesday 22nd July at 7.00pm UK time and Jim Kerr will also be on the sofa for a chat. They will be broadcasting live from Glasgow, the band’s hometown, and the host of the 2014 Commonwealth Games which open on Wednesday.

Also, on Wednesday morning, Jim, Charlie and Sarah will guest and perform on Ken Bruce’s BBC Radio 2 morning show between 09.30 am to midday UK time which will also be broadcast from Glasgow in front of a live audience. Although the band are on tour at the moment and should actually be in Sicily ahead of their show on Thursday, Jim, Charlie Burchill and Sarah Brown will perform a stripped down Electroset version of 4 tracks Live!

Both appearances will be available online afterwards. 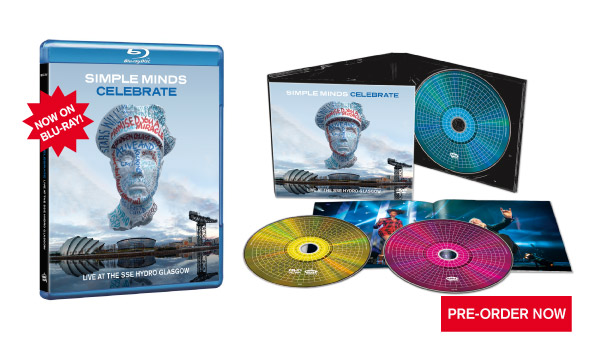 A reminder that the Simple Minds film – ‘Celebrate – Live at the SSE Hydro Glasgow’ is soon to be on general release on Blu-Ray Disc and also as a 2CD+DVD set.

This 93 minute edit of the SSE Hydro Glasgow show will begin shipping on 28th July 2014 and is available to pre-order now!

Includes ‘I Travel’, ‘The American’, ‘Love Song’, as well as huge hits ‘Promised You A Miracle’, ‘All The Things She Said’, ‘Alive and Kicking’ and ‘Don’t You (Forget About Me)’ Both the Blu-Ray and the Digipak 2CD+DVD contain a booklet of photos of the show.

Simple Minds – Celebrate – Live at the SSE Hydro Glasgow is released on the 28th July 2014 and is available to order right here on Blu-Ray and 2CD+DVD.

Hope to see you at the remaining Summer Live Shows!