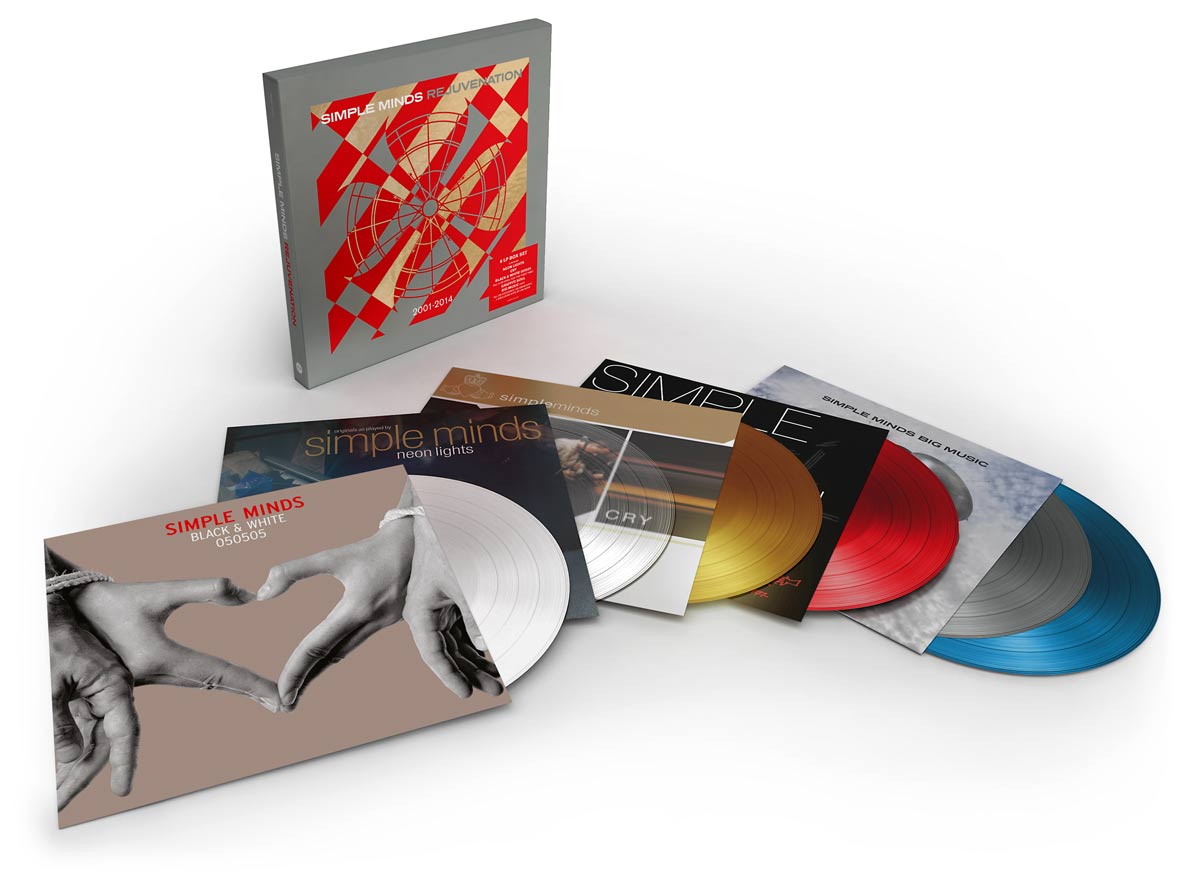 Posted at 00:01h in Box Sets by Simple Minds
Share 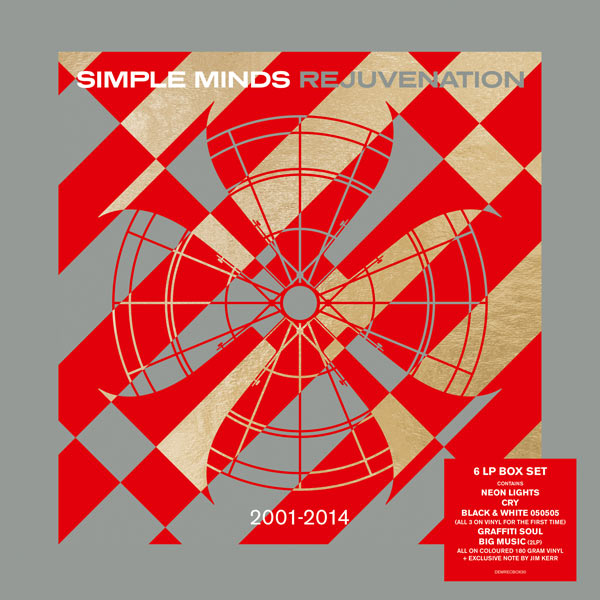 After leaving the Virgin label, and a one-off album with Chrysalis, Simple Minds took stock and decided to make records for themselves. An album of cover versions of songs dear to Jim Kerr and Charlie Burchill, “Neon Lights“, was released in 2001, followed by “Cry” in 2002, an album of new compositions recorded in Glasgow and Sicily.

The recordings for “Black and White 050505” were completed on the 5th May 2005, hence the title. This album along with “Neon Lights” and “Cry” make their first appearances on vinyl in this box set, with specially-created outer and inner sleeves, and include some exclusive bonus tracks from the CD releases.

“Graffiti Soul” continued the band’s return to the top, charting at # 10 in May 2009. “Big Music” [2 LP] was released in October 2014, charting at # 12. All of the albums are pressed on different coloured 180 gram vinyl, and the rigid slipcase features a brand new note by Jim Kerr.

SIDE B
1. Bring On the Dancing Horses
2. The Needle And The Damage Done
3. For Your Pleasure
4. All Tomorrow’s Parties
5. Being Boiled
6. Love Will Tear Us Apart

SIDE A
1. Stay Visible
2. Home
3. Stranger
4. Different World (Taormina.me)
5. Underneath The Ice

SIDE B
1. The Jeweller Part 2
2. A Life Shot In Black And White
3. Kiss The Ground
4. Dolphins
5. Too Much Television

SIDE A
1. Moscow Underground
2. Rockets
3. Stars Will Lead The Way
4. Light Travels
5. Kiss And Fly

SIDE D
1. Kill Or Cure
2. Broken Glass Park
3. Spirited Away 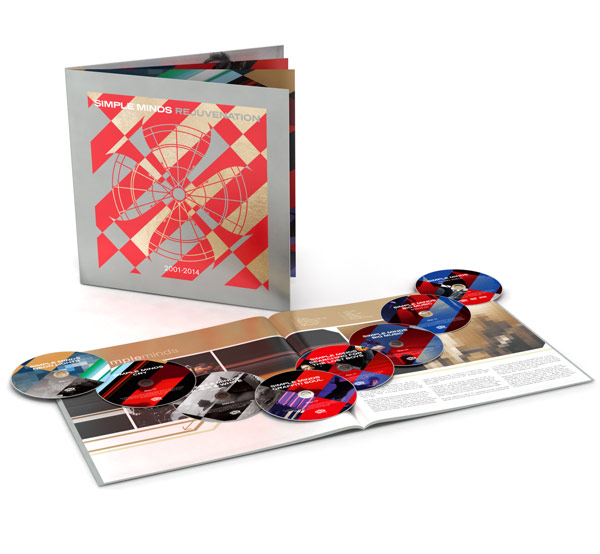 After leaving the Virgin Records in the mid-nineties, following a one-off album with Chrysalis, Simple Minds took stock and decided to make their own albums. An album of cover versions of songs dear to front man Jim Kerr and guitarist Charlie Burchill, Neon Lights, was released in 2001, followed by Cry in 2002, an album of new compositions recorded in Glasgow and Sicily.

Following the successful X5 box set and 5X5 tour in 2012 – for which the Simple Minds’ legacy was rightly reappraised, the band entered the studio to work on what would become Big Music. Released in October 2014, charting at #12, the album received rave reviews, being awarded four-stars in MOJO, Q Magazine and The Times.

This 7 CD + DVD 12 x 12 book set features the five albums plus twenty-four bonus tracks – non-album B-sides and originally limited bonus CD tracks, including the rare album of covers Searching For The Lost Boys (now including a cover of T. Rex’s Children Of The Revolution), and the Big Music Bonus CD (now including the Simple Minds/Stranglers collaboration). The remixes include the four acclaimed Johnson Somerset remixes of the singles from Big Music.

The DVD features the 10 rare single promo videos from these albums, along with the even rarer EPKs made for the albums’ promotion.

Housed in a handsome 12 x 12 book, the booklet features photos and newly written extensive and revealing album-by-album notes by Jim Kerr himself.

CD 5 – SEARCHING FOR THE LOST BOYS

BONUS TRACK
10. Children Of The Revolution

BONUS TRACK
06. (Get A) Grip (On Yourself) [single version] (with The Stranglers)