Out Now! On 1st November 2019, Simple Minds released 40: THE BEST OF – 1979-2019, a new compilation album that covers all 40 years of the band’s now legendary recording career. It captures their early experimentation, cross over chart successes, right up to their new imperial phase represented by songs from 2015’s Big Music and last year’s Walk Between Worlds, which was their highest chart success in over 20 years, charting at number 4 in the UK.

Compiled in conjunction with the band, 40: THE BEST OF presents the very best of Simple Minds extensive catalogue. It is a comprehensive overview of 40 years of one of Britain’s most successful bands, taking in the innovative sheen of Promised You A Miracle and Glittering Prize, the anthemic sweep of Waterfront and Sanctify Yourself, the firebrand strand of Belfast Child and Mandela Day, the colossus that is Don’t You (Forget About Me) and Alive & Kicking, and bringing things right up to date with the inclusion of a new track: a cover of King Creosote’s 2014 Song, For One Night Only. 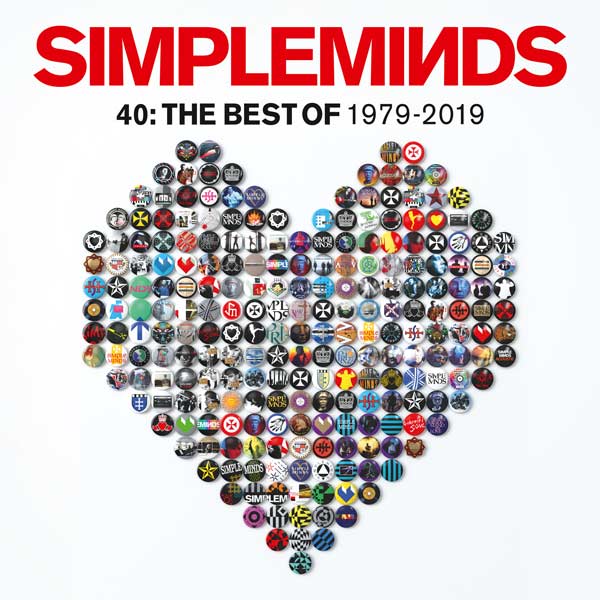 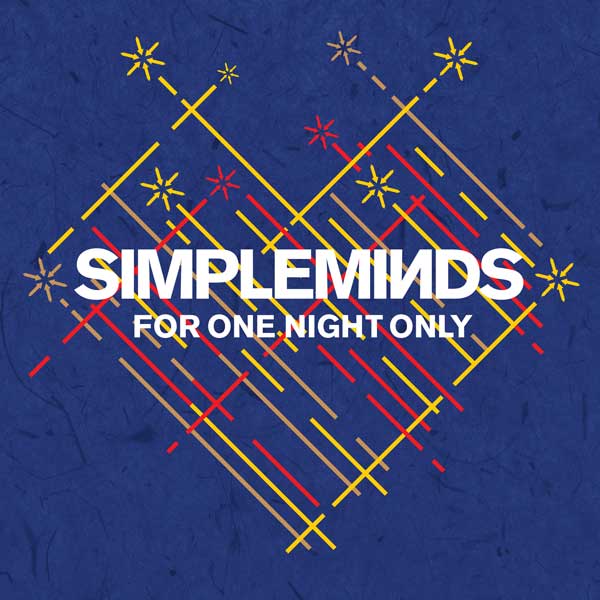 INCLUDES THE NEW TRACK, A COVER OF KING CREOSOTE’S ‘FOR ONE NIGHT ONLY’

For One Night Only captures Simple Minds unique talent of taking an already fantastic song - as they did with their cover of The Call’s Let The Day Begin on 2015’s Big Music album - and injecting its sentiment with added urgency. The result is a clarion call to their fans the world over, which is sure to become a momentous live moment on their world tour.

FORMATS:
40: THE BEST OF 1979-2019 is available on a 3CD deluxe edition, single CD, 2LP coloured vinyl and a 40-track digital format. It was remastered at the world-famous Abbey Road studios and has spectacular new art designed by long-time collaborator Stuart Crouch, featuring iconic symbols by Malcolm Garrett which represent the 40 years.

Home
Magic
Promised You A Miracle
This Is Your Land
Honest Town
Glittering Prize (Acoustic)
Waterfront (Acoustic)
See the Lights (Acoustic)
Let There Be Love
New Gold Dream (81,82,83,84)
All the Things She Said
Once Upon A Time
Don’t You (Forget About Me)

TICKETS ON SALE NOW – *Postponements due to Corona Virus precautions by relevant authorities.

Tickets for postponed dates are valid for applicable rescheduled shows

Formed in the seventies, and named after a lyric – ‘so simple minded’ – from David Bowie’s seminal 1975 single The Jean Genie, Simple Minds have become one of the most successful bands ever to come from the UK, selling over 60 million records worldwide, having number one singles on both sides of the Atlantic, and number one albums the world over, including five UK number one albums: Sparkle In The Rain (1984), Once Upon A Time (1985) and Street Fighting Years as well as the concert recording Live In The City Of Light (1987), and the compilation Glittering Prize 81/92.

The collection is a reminder of one of the most musically diverse and adventurous careers ever in British music, which saw Simple Minds record some of the most beguiling and inventive music of the post-punk period. On songs such as 1979’s Chelsea Girl (from the band’s debut album, Life In A Day), and I Travel, Celebrate (1980’s Empires and Dance), Love Song, The American (Sons and Fascination/Sister Feelings Call), Simple Minds set the standard for the British alternative scene.
From 1982 onwards the band produced some of their most inspiring and wide appealing work. Beginning with their 1982 classic album New Gold Dream (81-82-83-84), with several songs from the album included here, follow up album Sparkle In The Rain (Up On The Catwalk and Speed Your Love to Me), and culminating in two UK number one albums and a number one single: 1985’s Once Upon a Time (represented here by the aforementioned Alive & Kicking and Sanctify Yourself) and 1989’s Street Fighting Years, and the single Belfast Child.

Into the nineties Simple Minds continued to release albums and create gems, many of which have grown in stature amongst fans and become staples of their live set. Included here from the period are Let There Be Love, See The Lights, She’s a River and War Babies.

Over the past 10 years Simple Minds have rekindled the magic that made them a vital artistic force in their early days, found themselves referenced by younger artists and playing to countless thousands of people every year, all over the world. They have been the recipient of the Q Awards Lifetime Achievement and received universal critical acclaim for their recent albums. 2015’s Big Music was described by MOJO magazine as “their best album in 30 years”, and last year’s Walk Between Worlds was acclaimed across the board and became their most successful album in over two decades, culminating in their largest US tour to date. Two songs are included from each of those albums: Honest Town and Blindfolded (Big Music), and Sense of Discovery and Magic (Walk Between Worlds).