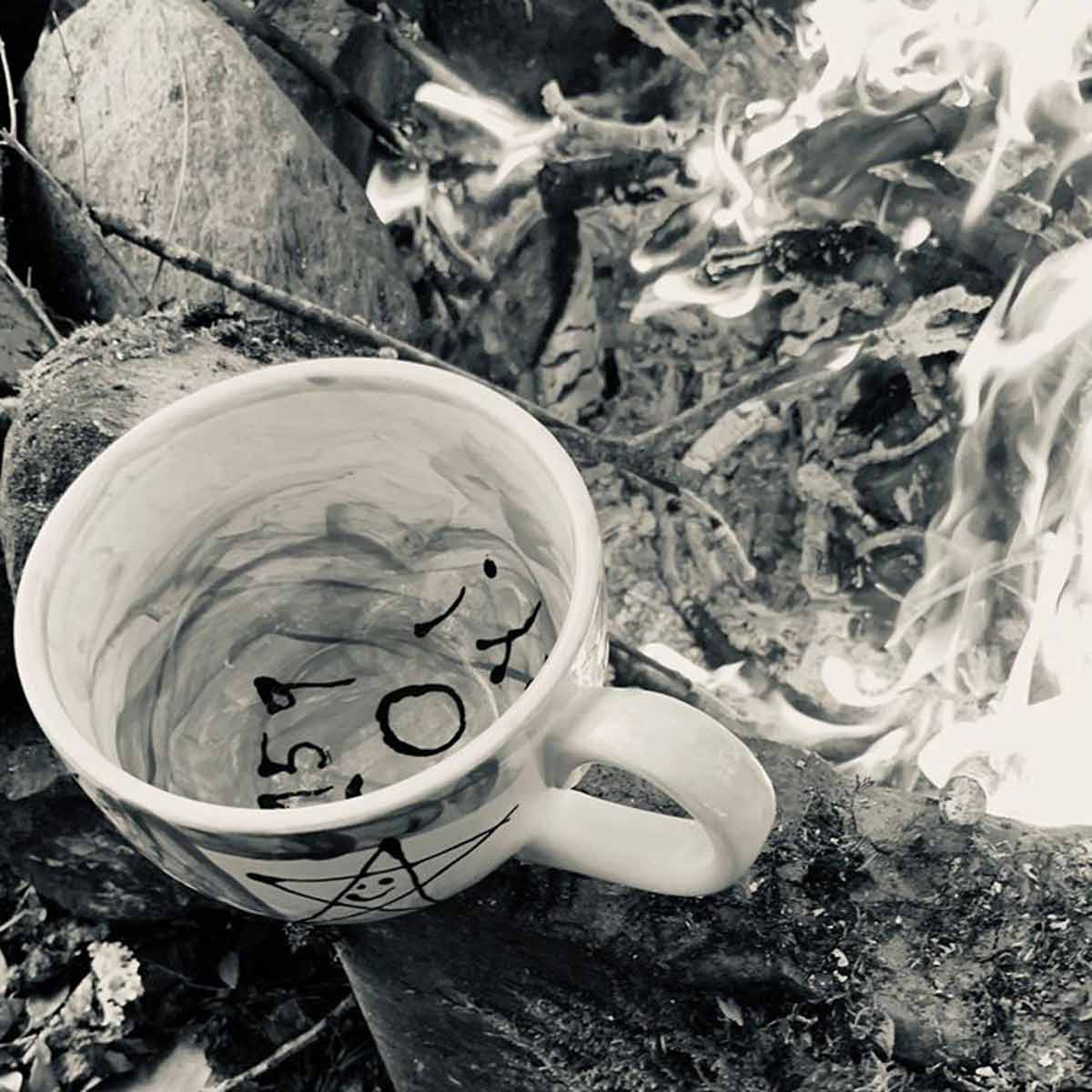 Posted at 16:57h in Spotify by Simple Minds
Share

No doubt about it in my view! Whenever possible, music was meant to be heard outdoors. And well, with this being Scotland in the month of May, where the weather’s been glorious, I decided to get outside in the latter part of the evening and spend time sitting at the bottom of the garden, a few yards from the river bank.

Gathering wood for the outside brick fire I made a few days earlier, I amazed myself by getting a decent fire going, then continued to sit under the trees, enjoying the smell of burning wood, listening to all kinds of music, and drinking a huge mug of green tea.

The mug incidentally, is last year’s birthday gift from my twin 9 year old grandsons. Their cosmic designs adorn it. I just love it!

It was then I decided to compile my Spotify playlist for the month of May. So here you go.

“The Swedish group rarely made public appearances; most of their promotional photos featured the members wearing masks with birds’ beaks, similar to the traditional Venetian Medico Della Peste (plague doctor) masks worn during Carnival.” (Wiki)
I guess there are plenty of people again wearing masks these days – including yours truly! Listening to this sublime tracks takes me back to when Simple Minds would use it as the intro music to our live shows.

Released in 1973, just before I had my first after school job, (Cleaning the back of a butcher shop… Yeuch!) I was not able to afford much music back then. Hearing this on radio only, made me want to leap up and down every time I heard its intro. Still does. I had no idea until now that it was Tina who composed this song, I guess I always imagined that with Ike being so domineering in that relationship, he alone would have taken on songwriting duties. But no! Nutbush City Limits was Tina Turner’s first stab at artistic independence. Glorious it is.

When Simple Minds first arrived in Australia in 1981 it was all too evident that as popular as overseas acts were, there was however a special place place in the hearts of Australian for their very own local bands. Although at that time those bands would not have meant anything much to anyone outside of OZ, it would only be a matter of time before the world would hear plenty about them. Midnight Oil being a prime example!

Reggae Got Soul : Toots And The Maytalls

Full of energy, warmth, and the deeply soulful sound of Toots Hibbert vocals, this is a regular on any pre gig playlist I listen to backstage. Still one of the very best old school reggae live acts to see, like many others I wonder where does Toots get his energy from? Yet another reggae classic produced by Chris Blackwell,

Dream Within A Dream : Propaganda

“Edgar Allan Poe’s short poem A Dream Within A Dream questions the nature of reality and human existence. Fundamental perceptions might not be what they seem to be. Is life nothing but a series of unreal events that the mind invents within the unreal environment created by God?” (Owlcation.com)

Mirroring the birdsong I hear each morning through the open window of my bedroom, this U2 song also opens with the sound of birdsong, albeit recorded live in Fez, Morocco. Although it is a song that in my experience rarely gets mentioned, I wholeheartedly agree with The Edge’s long-time guitar tech Dallas Schoo who described the tune as “one of Edge’s major solos – you won’t hear better than that on any other song.”

Tangled Up In Blue : KT Tunstall

“She was workin’ in a topless place. And I stopped in for a beer.
I just kept lookin’ at the side of her face in the spotlight so clear.
And later on as the crowd thinned out, I’s just about to do the same.
She was standing there in back of my chair. Said to me, Don’t I know your name?”

KT covered my fave Bob Dylan. Big deal… Everyone covers Dylan songs, Right? Yes, but only the greats know how to cover Dylan songs in ways that seemingly puts themselves in the centre of Bob’s world. What a triumph!

I recall buying McLaren’s 1984 album ‘Fans.’ Another of Trevor Horns imaginative productions, I was fascinated by the mostly successful attempt at fusing opera with 1980s electro and R&B. The best of all being this track that contained snatches from Puccini’s Madama Butterfly opera.