Once Upon A Time Reaches No 1

Home > History  > Once Upon A Time Reaches No 1 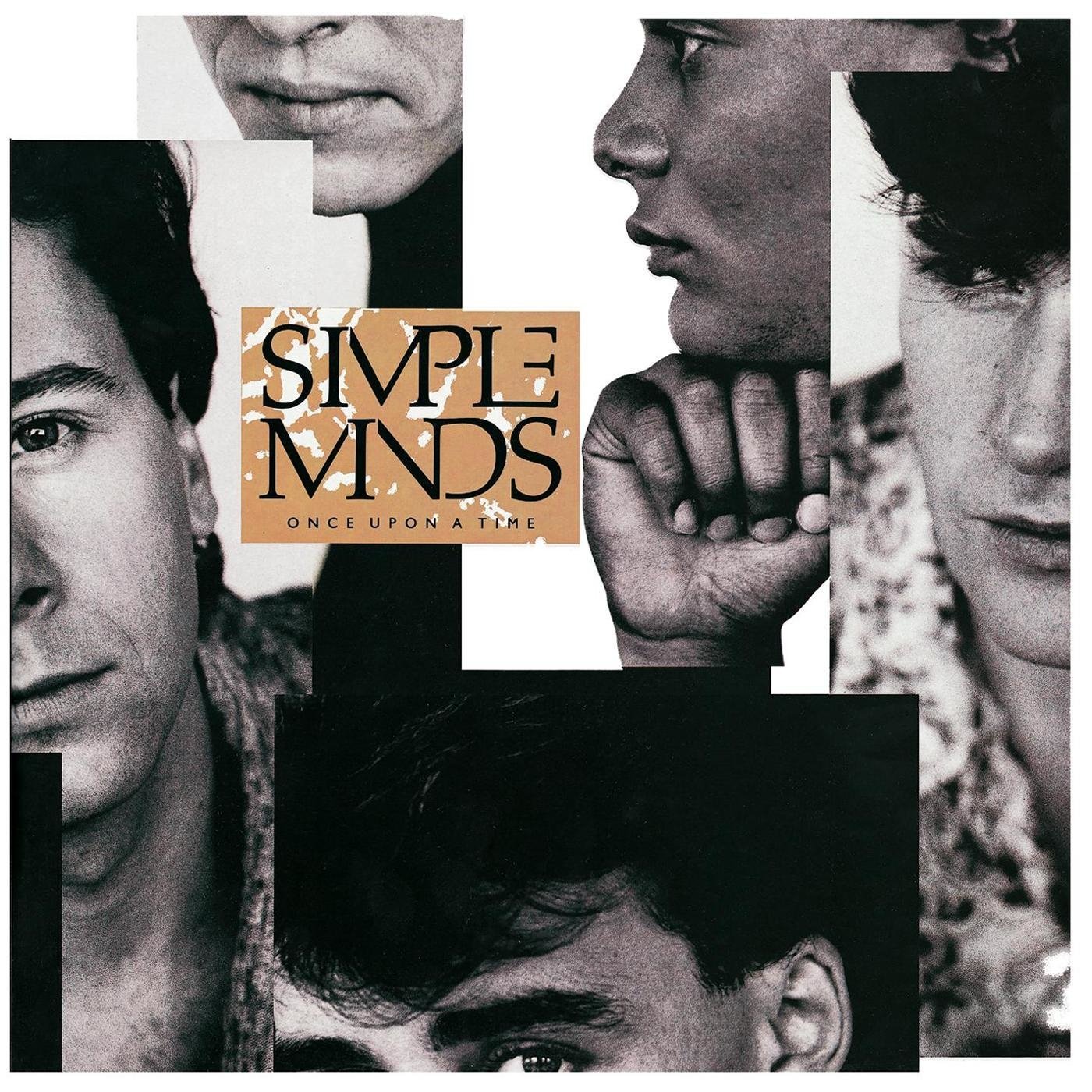 The album ‘Once Upon A Time’ went to number 1 in the UK on this date and the band were at the beginning of a major world tour that would see them play to stadiums in many countries and would last well over a year. What are your memories of that period?

Once Upon A Time Box Set

Originally released in October 1985, ONCE UPON A TIME became Simple Minds’ most successful album to date, shifting two million copies in two months, hitting the top spot in the UK and making the top ten in America. It spawned four top-twenty singles and launched a fifteen month long world tour that kept Simple Minds’ name in the music weeklies for most of 1986. And with Jimmy Iovine and Bob Clearmountain providing a production dream team, and Anton Corbijn contributing to its instantly recognisable artwork, then ONCE UPON A TIME had all the attributes of a classic 1980s album.

Following the release of SPARKLE IN THE RAIN, Simple Minds undertook a 30-date US tour supporting The Pretenders. The barely populated halls and disinterested audiences they played to, meant the album campaign ended on a flat note. Undeterred, the band regrouped at the newly opened Barwell Court in Esher, Surrey to rediscover their strengths, start writing new material and prepare for a serious of New Year Barrowland gigs for which they were assured a heroes welcome. They dug up old demos, took existing songs and played with their tempos, arrangements and melodies and tried almost everything to find those elusive ideas which would lead to new songs. As the November nights grew longer, the elegant Tudor buildings of Barwell Court started to echo to the beginnings of ONCE UPON A TIME, as recognisable instrumental versions of Ghost Dancing, I Wish You Were Here and Come A Long Way started to take shape. 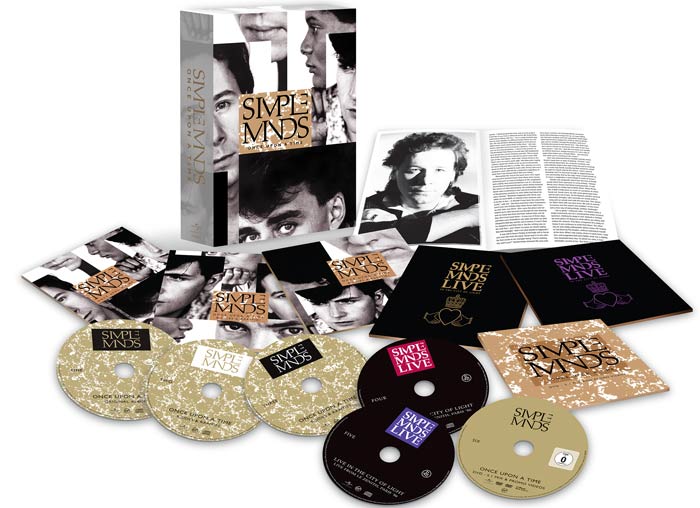 The unexpected arrival of Keith Forsey forced a break in this routine. A&M, their shared American record company, asked the producer to try to coax the recalcitrant Scots into recording his Don’t You (Forget About Me). When originally approached about the song, the band had knocked it back, due to being busy and having reasonable success with their own material. But the band’s love of soundtracks meant they’d always had an eye on film scores and the offer of a film soundtrack was their Achilles Heel.

Forsey worked his magic on the band. They still weren’t impressed by his demo, but they liked his determination and felt the song could be moulded a little into their own style. They reluctantly agreed on the condition that Kerr could write some words of his own.

Don’t You (Forget About Me) was soon forgotten as Simple Minds started rehearsing for their Barrowland gigs. As far as the group were concerned, Don’t You (Forget About Me) was just another track on another soundtrack album: there was no talk of it being a single, there was no talk of it being the title track, and it was going to buried on a LP featuring several other big names. Yet the song started to take on a life of its own; the record company loved it, American radio loved it and so a single became an urgent necessity. Simple Minds were initially nonplussed by this attention, shrugging it off as it didn’t really matter in America, as no-one knew them or their music. But the situation in Europe was different and they quickly put a block on a European single release.

Following the huge success of their Barrowland gigs and the great reception their new material received – Ghost Dancing was played live for the first time – the group set their sights on the almost unobtainable Jimmy Iovine and Bob Clearmountain as producers for their new album. The success of Don’t You (Forget About Me) helped their cause, giving the band a welcome boost and extra publicity in the US.

Once they’d secured this dream pairing, the planning of the recordings finally fell into place. Final rough arrangements continued at Barwell Court until May 1985, when both Iovine and Clearmountain visited briefly to tie-up loose ends, listen to the rough demos, and in Iovine’s case, suggest and mentor the final compositional twists of Alive And Kicking. The material was sounding good and the band had the basis of songs like Alive And Kicking and All The Things She Said and various others.

Simple Minds started work at The Townhouse in June, initiating the formal recordings of the album with Once Upon A Time, Ghost Dancing, Alive And Kicking, Oh Jungleland, I Wish You Were Here and Come A Long Way. Further recording and mixing was planned for later that month in the rural confines of Bearsville Studios in New York State where Clearmountain was based; and final mixing was planned for Iovine’s New York City base at Right Track Studios.

The move to America and Bearsville nicely coincided with Live Aid. Simple Minds were never invited to participate in Band Aid’s Do They Think It’s Christmas? but were invited to perform at the live concert; and with Don’t You (Forget About Me) having just started its slow descent from the US charts, and the band booked into Bearsville Studios  the next day to continue recording and mixing, then it made sense for them to appear on the Philadelphia stage. The day after Live Aid, the band drove to Bearsville Studios, to finalize the recordings and start mixing, now under the full-time guidance of Iovine and Clearmountain. Iovine’s experience of the American music business and his ear for a Stateside hit also shaped the sound of the album, which the band were fully open to.

Working with Iovine and his New York connections brought in many other advantages. The sound of Bowie’s Young Americans was still a major influence and Iovine suggested getting the same performers to guest on ONCE UPON A TIME. A phone call was made and in no time at all Robin Clark, one of the backing singers on Young Americans, was in the studio adding her distinctive backing vocals to Alive And Kicking, All The Things She Said and Once Upon A Time. The other backing vocalists brought in during the sessions included The Simms Brothers and Michael Been of The Call, who became a very close friend (the band would later cover The Call’s Let The Day Begin on their 2014 album, BIG MUSIC).

Alive And Kicking was the obvious first choice of single and its release preceded ONCE UPON A TIME by a month. The new sound, artwork and video indicated what was to come and whilst the single reached the same chart position as its predecessor in the UK, it just slipped short of the top spot in America, stalling at number three. But ONCE UPON A TIME easily eclipsed SPARKLE IN THE RAIN when released in October 1985, shifting two million copies in two months, hitting the top spot in the UK, and making the top ten in America.

In support of the album, Simple Minds undertook their longest and biggest tour yet, beginning in the USA in October 1985 (kicking off at Pughkeepsie on the 31st) and visiting mainland Europe, the UK, the USA again (now with The Call as support), Canada, Japan, Australia and New Zealand. This included a series of massive outdoor summer concerts at Ibrox, Milton Keynes Bowl and Torhout-Werchter. Their first three top-10 singles from the album were signposts detailing the progression of the tour, and the fourth, Ghost Dancing, was released as the tour wound up, all profits being donated to Amnesty International. As Simple Minds took a well earned rest, after years of relentless writing, recording and touring, Virgin released the lavishly packaged LIVE IN THE CITY OF LIGHT, a massive live souvenir of ONCE UPON A TIME recorded over several nights at Le Zenith in Paris, which earned them their third successive UK number one.

The story of ONCE UPON A TIME was also intimately tied up with Don’t You (Forget About Me). If it hadn’t been for that song, the song which finally brought them their well deserved recognition in America, then it’s doubtful whether Jimmy Iovine or Bob Clearmountain would’ve ever come on board. And yet, Don’t You (Forget About Me) had that slight stigma of being the outsider, the song penned by another team, a cover version which they’d made their own. When they tried to equal or outdo it with Alive And Kicking, then they almost made it, but Alive And Kicking stalled at number three, just coming up short. Yet despite the debt owed to the movie soundtrack, Don’t You (Forget About Me) was left off the album, a move that is still contentious today, thirty years later.

“When I think of our most complete albums,” said Kerr. “I would say NEW GOLD DREAM (81,82,83,84) is definitely a complete album – it just feels very complete to me from start to finish; and I don’t think I’d change anything on ONCE UPON A TIME and I wouldn’t change anything on BIG MUSIC. They, for me, are the most complete albums.  Someone might say Don’t You (Forget About Me) should’ve been included; and when you think about it, leaving it off is rather eccentric thing to do – you wouldn’t get away with that now. It would’ve sold double the amount of copies though! But it’s very complete: the artwork, everything about it, it is bang on.”