Simple Minds at The Venue

Home > All News  > Simple Minds at The Venue 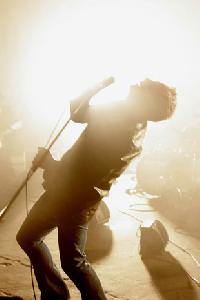 Simple Minds have been around since time immemorial or so it seems – the bar tonight, chock-a-block with competition winners who apparently hadn’t seen the band for 20 years (or similar), echoed with stories of the invention of the wheel and how things had improved since Saxon times, OK I exaggerate, but you get my drift. The reality is that their first album Life In A Day was released in 1979, their latest, the excellent Black & White 050505 has just appeared on the shelves and it does more than suggest there is life in the old dog yet! The evidence supplied succintly by the album was backed up by a scintillating set in intimate surroundings when the band played the latest of Capital Gold’s Legend series of gigs.

The venue (The Venue, off Leicester Square) was personally selected for the concert by Jim Kerr, front man and focal figure of the band, though the excellent guitarist Charlie Burchill has also been with the band from Day One. This small and snug arena is famous for being the scene of the Sex Pistols first ever gig (I doubt if today’s seating would have survived that gig!), as the ever-youthful DJ Mr. David Jensen informed us in his kind introduction. Fortunately, another difference between this concert and that long-gone punk moment was the fayre was decidedly more coherent than anyone who witnessed the aforementioned gig would remember (if indeed they still can remember?) and the musicality was on a far higher plane. Jim and Charlie are today backed by a superb band, drummer Mel Gaynor, bassist Eddie Duffy, and Keyboardist Andy Gillespie, also not to be underestimated are the latter two’s fine harmonies that underpin a lot of the Simple Minds repertoire.

To tell the truth, I was expecting the show, recorded for broadcast by Capital Gold, to be a 40 minute thank you and goodnight affair, with a couple of new numbers thrown in to gently introduce the new album to a hopefully returning audience. What we actually got was a full-on, all guns blazing 90 minute trek through their awesome back catalogue, with four new tracks intermingling perfectly along the way, the new material stands proud with the old, particularly the new single Home, which despite it’s youthfulness represented one of the evening’s highlights. I’m sure that a lot of the audience, the non-fans obviously, were expecting a laid back show, possibly passé, outmoded and unfashionable due to the bands longevity, what they actually received was a refreshingly contemporary and neoteric set full of energy and occasionally sheer class. Loud, straightforward and intoxicating, the band seeming to excel and thrive on the intimacy, they could rarely have been closer to the audience (to the degree where Jim endured several hugs from females with a friendly thank you response!) and the audience raised the roof in sing-alongs despite the small number present. The crowd pleasers were all present and correct, Don’t You Forget About Me, Sanctify Yourself, Waterfront and Alive & Kicking all gaining great reactions. Overall a super night that had even the ticket winning sceptics nodding in awe –

Simple Minds might be ageing, gracefully it must be said, but for energy and vigour this concert would take some beating, for class and presentation it would really take some beating. They are still alive and kicking, check them out if you ever get the opportunity….

The Critic.
Reviewed by Les Linyard.