Home > All News  > P-Machinery on ‘Stranger’ 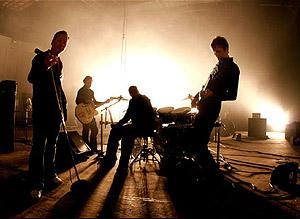 Posted at 20:32h in All News, Release Info by Simple Minds
Share

P-Machinery on ‘Stranger’
The second single taken from the Black & White 050505 album is a new mix of Stranger entitled Stranger (London Mix). An iTunes (UK) exclusive, the new mix will be available for download from Tuesday November 1st 2005.

Best known for their US No.1 hit single Don’t You Forget About Me and anthemic rock songs Alive & Kicking and Waterfront, Simple Minds have sold over 30 million albums worldwide. There influence is far and wide and name-checks everyone from Bloc Party, The Bravery to The Killers. Stranger (London Mix) was remixed in London by Jez Coad, and includes a different opening introduction, added keyboards and percussion, extra sequencing and backing vocals.

The song, along with the critically acclaimed Black & White 050505 album, is being hailed as the most accomplished Simple Minds album in years. ‘Stranger’, along with other songs from the current album, will be performed on Simple Minds’ 2006 European Tour which kicks off on January 31st 2006 at the Belfast Waterfront Hall Auditorium.

Jim Kerr’s spectacular, if not, seductive, vocal reigns triumphant over this epic and emotionally charged rock song. Together with co-founder and lead guitarist Charlie Burchill, they have crafted a pop that propels Simple Minds into a new sonic dimension.

Says vocalist Jim Kerr, “Of all these new songs I feel that Stranger captures most the ‘the spirit of the big pop songs’ that are second nature to Simple Minds.”

If any of the recent reviews of the current album are to go by, it looks like Simple Minds are on their way to another exciting new chapter in their 30 year plus career.