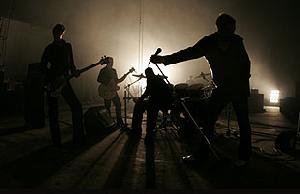 Yesterday we found out that a former work colleague of ours had been found dead in his apartment in Edinburgh. Although it is years since we last saw him the impact of the news was no less shocking and utterly sad.

In truth I had been thinking of him as recently as a couple of weeks ago when we were in Hanover, Germany. For some reason I always have vivid memories of our early days touring  as an unknown band playing in empty night clubs with poor equipment and with only a skeleton road crew that usually consisted of two or three young Scots roadies.

Our deceased friend was our then sound engineer for those trips and I recall sharing both a room and usually more than one bottle of cognac with him whilst in Hanover. I also recall the horrendous headache and the vilest hangover that I endured the next day and as a result since then alcohol has barely passed my lips to any degree. Yes that is how bad my “Hangover in Hanover” was, while on the other hand he could drink so effortlessly. I admired him so much for his constitution and his willingness to embrace the rock and roll lifestyle hand book! I thought he was the real deal and I was merely a rookie!

But it is desperately sad to hear of the death of friends whom we recall as being young and full of vigor and equally it alarms me no end when I realize that over the last few years it has been an ever increasing experience to endure, as more and more people we know seem to somehow slip away.

Let’s be honest, I was born and raised in a country that has a massive problem with alcohol abuse. I don’t know why! I have also spent my entire working life in an industry known for its drug culture. Being so, for many years the idea of being around people for whom excessive drinking or ingesting copious amounts of drugs was normal, was also entirely common to me.

To a degree I myself was as game as anyone, particularly when I was young and ignorant enough to play Russian roulette with my health. I had also yet to feel the responsibility of being a father, and the front man of a very energetic rock band that many people depended on in various ways. What was there to lose after all as I found the decadence of it all pleasurable enough and in some strange ways – spiritually enlightening even. Luckily however, I just never got hooked on anything and that is the story to this day if you piles of cheap chocolate and odious smelling French cheese!

Unfortunately however lucky as I may be in that sense, I have also gone through painful journey’s as I have watched up close and helplessly too many people that I care about struggle with issues that lead to alcohol and drug abuse. I am including the closest of friends and family members in that group. This is something that continues presently, and if it is nightmare enough to observe then how much worse it must be for any individual to go through with that kind of hell as relationships, careers and entire lives diminish as a result while they flounder so desperately with their problems.

My own father had a problem with alcohol. More than twenty years ago as Simple Minds were breaking through to popularity he took his problem by the scruff of the neck and has never looked back to the dark days since. He fought it and he won! What a hero! How great it is to have him around and how much I look forward to a few weeks time when he will be coming out on the road with us for a week or so. Now, if only anyone has got a clue what to do about his outrageous snoring as he journeys with us on the bus!

Meanwhile again our thoughts go our colleague who died and those that he has left behind. We will never forget him and others equally like him who spent many of their young years using their muscles and their wits while pushing forward our careers. Guys like him will always be part of our story