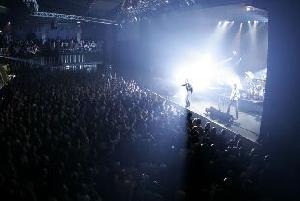 Admittedly it was with a slight heavy heart that we left Sydney on the early morning flight after the final performance of our Australian Tour. The city has always been one our favorites to visit, and as the blazing red dawn rose up on the day of departure, both Charlie and I acknowledged that it would be even more a wrench than previously to leave this place that thrills us each and every time.

Without doubt we have had a great tour that has hopefully gone a long way in re establishing our popularity in this part of the world. That was our goal as we set out, and with an existing gap of seventeen years since our previous visit to Australia, we knew not what to expect prior to arriving. Thoughts such as would we like the place as much as we had in the past had crossed our mind, as had the slightly more nervous thought that no one would be interested in us any longer due to our elongated absence!

On both counts in fact we had no need to worry, Australia is one of the most beautiful places on earth, the people are unique, and the audiences who came to see us for the most part overwhelmed us with their enthusiasm. The concert reviews themselves could not have been more positive and while the Melbourne concert in particular will live with me for a long time, the view from my suite of the lights at night surrounding Sydney Harbour will live with me forever!

New Zealand was our next destination and similarly as with Australia, after such a long gap since our last shows in the country we needed to give the best account possible of ourselves. Again, this is a place that encouraged Simple Minds so much in our early days and we have nothing but good memories of our previous tours. On one of those trips I even met a girl who was soon to be my wife. Although things may not have worked out for us as I had hoped, we continue to be close friends and I spent some moments during my time in Auckland thinking about the initial sweet days that we spent getting to know each other in that other fine city. Those were some of the best days of my life – but that was then and this is now!

Auckland treated us to three great gloriously crisp autumn days, and one red hot reception. The highlight of the show was when Malcolm Foster – who played bass with us on a number of tours – joined us on stage for the encore. Malcolm was always great to work with and so fine to be around, it was an absolute treat to catch up with him and I am delighted that his move to NZ has worked out well for him and his family. The show itself in the capital city went like a dream for me as it almost seemed to whiz past thanks again to a frantic crowd. It really means so much to us that after all these years people are still motivated to turn up and see us, still moved by our music. It was the perfect show to end this section o the tour with!

Strangely I feel much more energized as the weeks and months of touring pass. In addition the mixture of sunshine and the fairly relaxed touring schedule that we experienced in Australia and NZ has made me feel as though as I have been on some kind of semi – holiday over the past few weeks or so.  As a result I am not in anyway feeling any of the stress or strain that I might have imagined considering our schedule since January.

That can only be a good thing particularly in relation to the summer concert schedule that we will begin in June and continue with through until September. Meanwhile, with that I want to say thanks and goodbye to everyone who helped make the last month of concerts in Hong Kong, Singapore, Australia and New Zealand the total successes that they were, never forgetting of course everyone who turned out to see us. You made us feel and play great, and I promise that we will be back again!