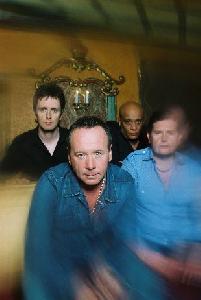 Forgive me if I sound a little too jubilant over the last six weeks or so, but I am wondering how things could have been in anyway more enjoyable.

Firstly we had a great end to the first part of our European tour that then followed with an amazing week in the dreamy island of Bali. Those who regularly read this diary will know that was then followed by OZ and NZ dates that went miles better than could be expected, as in fact did our shows in Singapore and Hong Kong. To cap all of it, over this last week I got to spend a week in solid sunshine in “my other home” town of Taormina, Sicily – and if that was not the perfect way of getting over a thirty hour travel trip from Auckland then I do not know what is!

Over the last ten years or so Sicily really has become a sort of home to me. Not only have I spent much of my time living there but we also worked on the writing and early stage recording of our last album while in Taormina, already we plan to work there again on our next. In an artistic sense it is a place that has had the most rejuvenating effect on me and for this I can never be thankful or lucky enough to have come across such a stunning environment.

With good reason then, due to our recent work schedule I have found that I have missed my life in Sicily so much. A rare weekend or so has been grabbed here and there but in effect I have barely set foot in Taormina this year, sad in a way for me but that is just the way it is. Nevertheless having returned over this last week or so it has given me extreme pleasure the kind of which only materializes whenever I return to the island after long absences, and how great it was to see and meet up with the friends that I have in that little town. All of them characters, all great people to be around, and hell – do they know how to live!

Friends apart, the strongest relationship I have down there is with land and the sea that surrounds the island. Particularly at this time of year when everywhere seems buried in a myriad of wild flowers and under siege from armies of white butterflies, nothing pleases me more than to wake up at 5.30. am. just as the sun is rising around the golden peak of Mt Etna, and I gulp down a cup of strong coffee and head off immediately into the surrounding hilly countryside where one does truly feel that you are traveling back in time to a Different World! Two hours of trekking is followed by a swim in the coo blue waters of Isola Bella, after which I feel born again and ready for the new day.

My trip to Sicily was arranged rather at the last minute and therefore it was with good fortune that by coincidence I was able to meet up with Bob Clearmountain and his wife Betty who were traveling through Italy. I have the most respect for Bob who for decades now has engineered, mixed or produced some of my very favorite records. He of course has worked on a couple of our albums also, including the most recent and he never gives anything less than 100% of his legendary talent. Betty herself is equally impressive, having founded one of the worlds current coolest software companies, but above all that I enjoy them and their company so much. They were so generous to us while we where working in California last year and in return it was great for me to see them – normally kind of stressed – relax a bit while in Taormina. I do hope that they come back!

In terms of coming back, we ourselves will be in Sicily around the middle of July as we have concerts both in Taormina and the capital city of  Palermo. For us the “homecoming” Taormina concert in particular will be the highlight of the summer series of concerts that we start this week with a show in Bonn. But that does not mean that we will give less than our all at each and every performance we are set to play during these next months. It does mean however that we will get to eat the best fettuccini with the freshest pesto, and only ten minutes after we come off stage. Can’t wait!