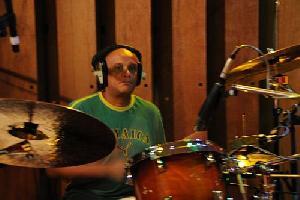 The Minds at Rockfield Studios …. it’s perfect really. A sublime combination of the old and the new. Old, because of the incredibly history of the place, the guys have recorded two albums here before, and the list of music icons that have been inspired here ranges from Queen [Bohemian Rhapsody] Oasis and the Stone Roses,  …. and new because of the anticipation of this new project.  I myself have worked here many times and find there is a very special atmosphere that seeps into the music.
It’s been three years since we worked together and there was a natural apprehension with all of us as to whether we could re-discover the same drive and creativity I feel we achieved last time in Holland. We really felt that the team we put together there was fantastic ….. hence importing Arjen again as engineer. When Jim, Charlie, Mel and Eddie arrived it was like no time had passed …. though I had forgotten how much Ed could make me laugh … oh, and the last time we recorded I was know as ‘the vicar’ and now I have been promoted to ‘the bishop’!
We are now well into recording the basic tracks …. This is so much more interesting and challenging than with a ‘normal’ band in the sense that the material is so eclectic …. diverse …. the moment anything becomes generic it gets rejected. Any idea … however seemingly crazy is tried …. often removed … but sometimes you get something magic that can’t be found in any other way. All of us enjoy pushing the limits to find what’s out there. I think we have every weird and wacky guitar effect known to man…… and they are all getting used … along with the collection of about 30 guitars!
There is something really great about living, eating, and working in the same place, going for the same goal with no agenda other than making the best music possible. It almost produces a gang, ‘us against the world’ culture.  I think we have all reverted to teenagers again. All this adds a freshness to the music.
I would have expected that a band that had been around for thirty year might have suffered a bit from burn-out. Not a bit of it … there is an hunger for creativity that is impressive.

Jez Coad
PS. I am constantly amazed at how loud Mel is. However much your memory warns you of the volume …. you are always shocked.