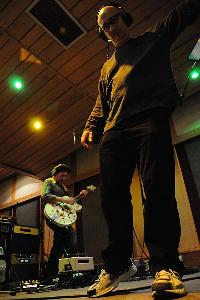 This is intense …. a real bunker mentality. We are in the depths of Monmouthshire so focussed on the task that we are quite surprised to find there are actually other people outside the gates of the studio! It’s approximately 12hrs a day of extreme concentration, which would be draining enough on it’s own if it wasn’t for the added hour of literally crying with laughter. I don’t think I have laughed so much ever. The concern and care about the quality of the music is certainly evenly matched with an extreme level of humour!

It’s all going frighteningly well. The whole project is taking on this wonderfully earthy feel that is both very fresh and very honest. It is so gratifying to ONLY be concerned about making great music. No talk about ‘market’ or ‘style’ just a collective concern to achieve the most expressive dynamic sounds possible. Never looking back .. only forwards. The team is just about perfect.

Jim: The vibe-meister …. constantly has the most objective viewpoint. Always sees the bigger picture and a great motivator. Ohh …. he sings quite well too 😉

Charlie: A real modest gentleman! Loves, like myself, to get in deep. Never afraid to get ‘perverse’ with sounds …. never content with the ordinary. Creates wonderful soundscapes with both guitars and keyboards. Impossible to compliment …

Eddie: Most solid bass player I have ever worked with. Knows exactly where that spine-tingling fine line lives between clarity and grunge. A man with too may great ideas. Dangerously funny!

Mel: Prefect combination of power and excitement …. I actually try to engineer it so there are an unnecessary number of chorus repeats at the end of the songs so I can get off on the ever more extravagant drum fills! I do wish he would stop rubbing my bald head though ….

Arjen: Engineer extraordinaire! Frightening really …. This is the conversation that occurs 20 times a day. Jez: “Arjen could you just ….” Arjen:”Done it already” . Sometimes I really wonder what I am here for! This man also gets the award for the most mis-pronounced name. So far Mel gets the award for calling him ‘Onion’!?

Hilko: Guitar/Amp/Tech Guru. If you are after a certain effect/guitar sound he will not only tell you exactly what you need but which era/revision/colour/gender and species is preferable. Unbelievable cook. On the downside … he’s a bit too good at cards for my liking!

Jez: I sort of benignly ringmaster the whole thing.