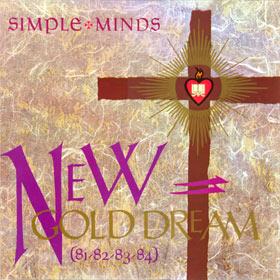 This week, September 13th to be precise, sees the 30th anniversary of the release of our “breakthrough album” New Gold Dream 81-82-83-84. Both critically and commercially the album achieved a combined success in the UK and paved the way for much bigger success internationally throughout the following years.

Still the favourite album for many of those who have tuned into our recordings, NGD will also always be a little “sacred” to all of us who worked on it. Hard to say why, but I guarantee that is just the way it is. In all honestly, I cannot recall the actual day of release but I am almost certain that we would have been busy with promotional activities while also starting to prepare for our second visit to Australia, and our first to New Zealand.

Back then we could never have imagined what life would be like six months in advance  – nevermind a whole 30 years. Life was lived in and for the moment back then, still how it is actually. Many will point out of course, how so many things have changed with the band since then. Rightly so.

Keeping the creative heartbeat going throughout it all has not been easy at all. But we would never have wished things to be any way other than how it was. How could we? It´s been a blast after all. The rewards have also been beyond our dreams. The biggest reward being the friendships and camaraderie that has flourished throughout.

Then again how much has really changed in essence. This last summer we played many more gigs than we did that summer 30 years ago. This summer we also spent as much time recording and writing as we did that summer back then. And finally, 30 years ago as already mentioned, we were preparing to visit Australia and New Zealand. Well, guess what? This morning we just spent an hour or so discussing which songs we would be playing in our upcoming tour of – Australia and New Zealand. Evidentially then, everything changes while everything stays the same.

But back to NGD itself. While I may not recall the day of release, I do recall the excitement leading up to it. The young audiences that were packing out those clubs and theatres we were then playing were already making us feel very special, driving us on with quite ecstatic responses night after night. More than that I recall the days in the studio spent making NGD. They were brilliant days indeed.