The Doors Inside My Head!

Home > All News  > The Doors Inside My Head! 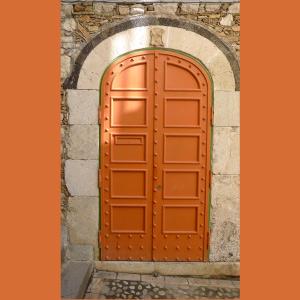 Posted at 23:48h in All News, Jim's Diary by Jim Kerr
Share
“How did I get here?” to quote David Byrne in “Once In a Lifetime” is the question that I have asked myself on many occasion when I am in Sicily.  Course the answer is that like millions before me and since, I got to Sicily by stepping off a boat that had crossed the Messina Straits. That was in July ´83 and yes, it was more than love at first sight.
I have no idea why of all the places that have intrigued me, Sicily in the end was the place that I felt I could become partly rooted. Or actually, I should say that I have no single idea, because in truth there are myriad reasons why the island was able to make such an impression. And far from being original, artists had after all been going to Sicily for hundreds of years, so many deciding as I had that Taormina was one of the most charmed places imaginable.
I don´t however live in Sicily, least not yet. I don´t live anywhere really. Work makes it so that I am always moving around. That suits me fine, even if it was quite a challenge to leave the beauty of the Sicilian spring behind yesterday.
However there is an image that I carry around in my head wherever I am in the world. It is like a door that I open, I walk thru and I feel instantly connected to the colours and the ambience of Sicily that by now I know so well.
In more real terms, I expect to be seeing quite a few doors over the weeks and months. Dressing room doors in particular, we are after all about to undertake six weeks worth of live dates in the UK and Ireland. Rehearsals for that have already started in Dublin and as always everyone is getting excited at the prospect of playing live this year.
In Sicily I may have been leaving behind a place that in many ways increasingly feels like a home. However in Dublin I am arriving back in a city that for 5 years actually was home to me, and that always feels good.
Talking of home. I notice that as yet no Glasgow date has been added. We will have to do something about that surely?
Jim Kerr